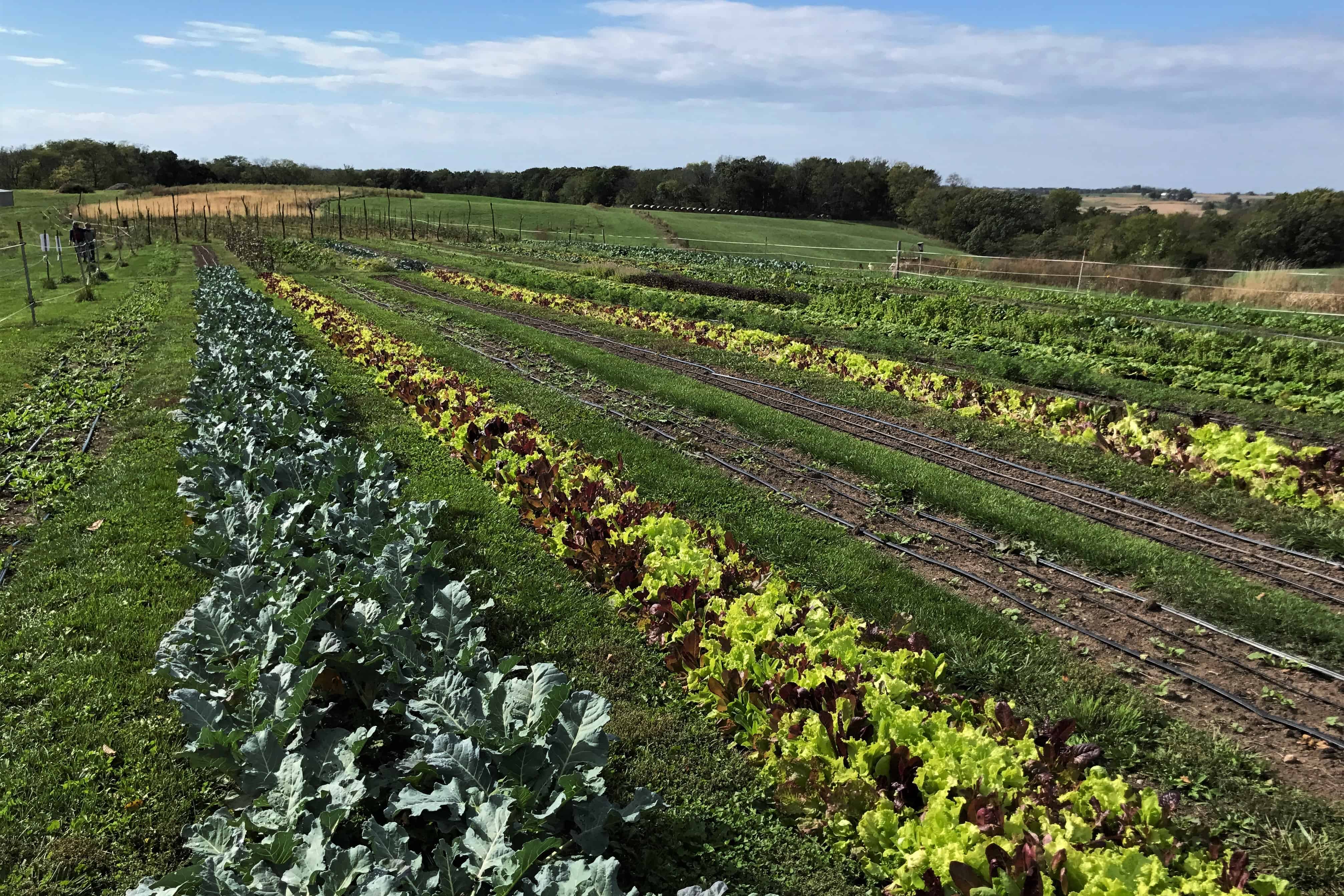 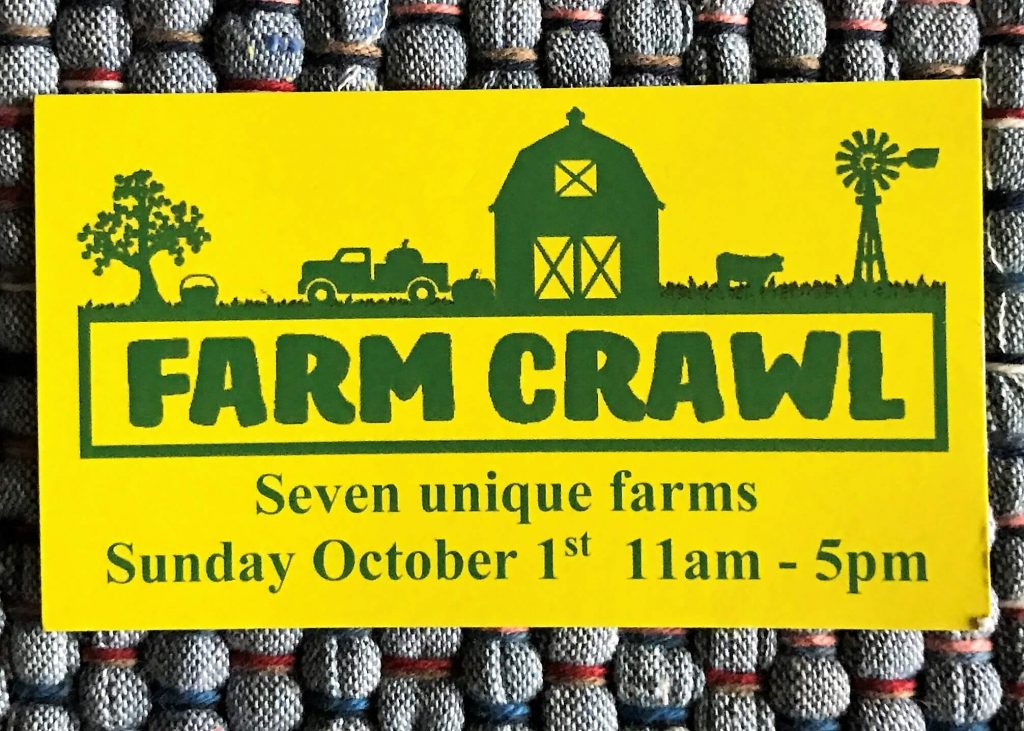 Whether you consider it a “crawl” from farm to farm because of all the gravel roads and traffic, or a “crawl” because that’s all you can do at the end of the tour, it doesn’t matter. A beautiful fall day spent touring farms showcasing Iowa agriculture, arts, people and food is a good day.

I had heard of a “Pub Crawl” before (we won’t get into that here) but never a “Farm Crawl” … and I grew up on a farm. When I saw an announcement at one of the stands at the Downtown Farmers’ Market for this event, I had to ask.

And then I had to go.

The tour included seven farms, in a loop, about an hour SE of Des Moines, near Knoxville. 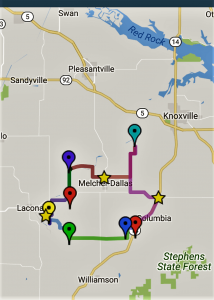 I wasn’t quite sure what to expect but when I pulled off one of the main roads onto my first stretch of gravel and saw the pretty countryside, creek beds, and fields, I was hooked. It was a perfect, fall day in Iowa and, by that, I mean cool and rainy, followed by warm and sunny, and low winds. Everyone here knows that a fall day in Iowa without snow is good weather. 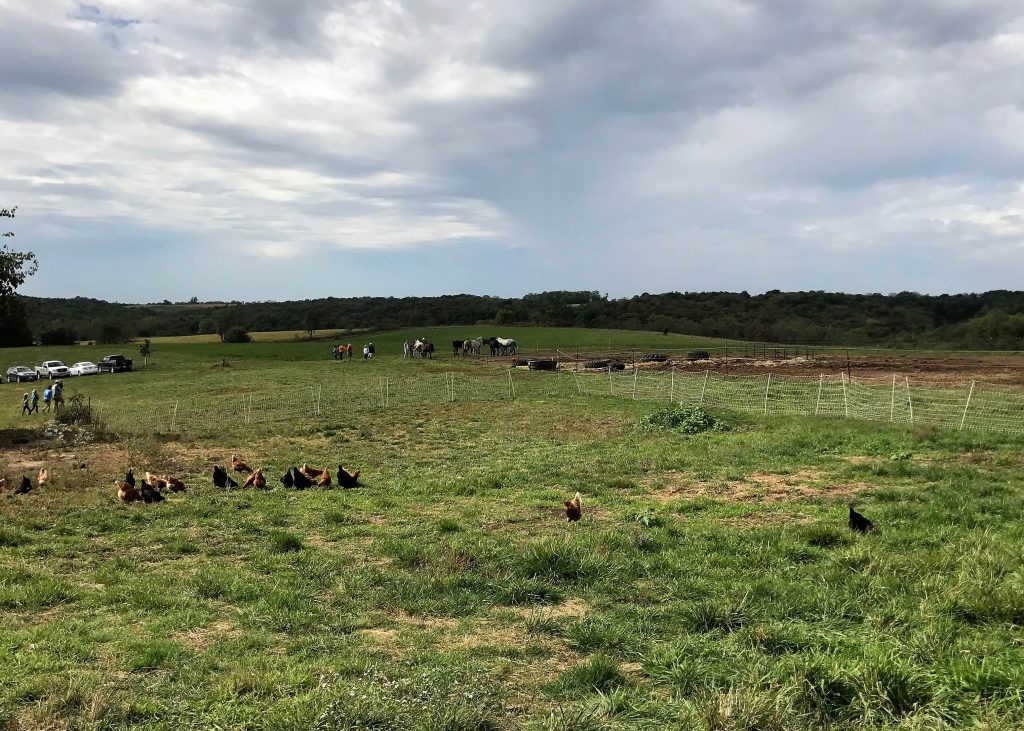 My first stop was at Coyote Run Farm just outside of Melcher-Dallas where I was greeted with an invitation to help myself to some homemade Vegetable Beef Borscht Soup (recipe), cookies and drinks … for free! Stomach full, I walked around the farm to see the horses and chickens, high tunnel and garden, and their rehabilitated barn. 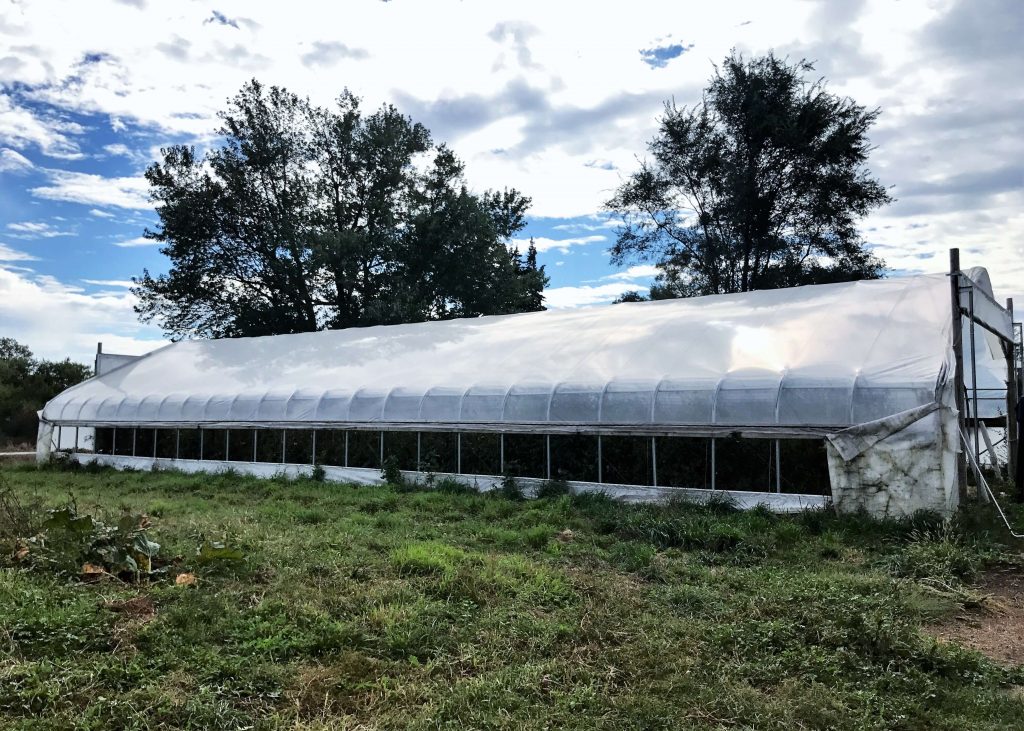 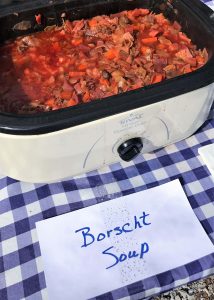 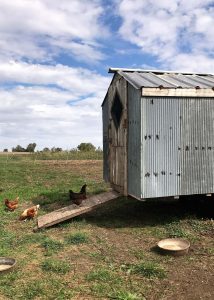 I left the farm with my hands full of tiny potatoes, 3 types of garlic, a few heirloom tomatoes, and a jar of local honey. Hmmm … how many more stops did they say there were? 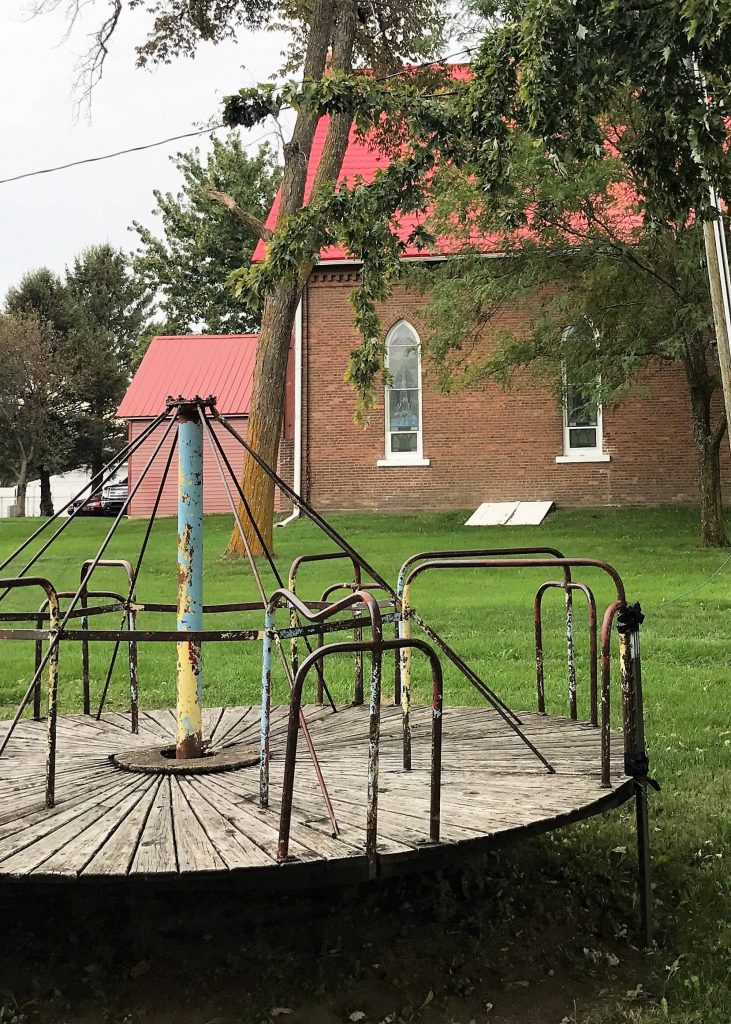 As I pulled up to the next stop, I realized it was the parking lot of a church, filled with so many kids! And the kids weren’t just participating, they were running the show! Trojan Iron Works, I would find out, is a student-run business at Pleasantville High School making custom metal signs. They paired up with the school’s FFA chapter and provided live music and games for the younger kids including calf roping, cheese and cracker “welding”, germination necklaces, and face painting. Again … for free. They also had a concession stand, were selling beef jerky and granola made by the Home Economics class, and were taking orders for pork and beef raised at the Pleasantville FFA Teaching Farm. 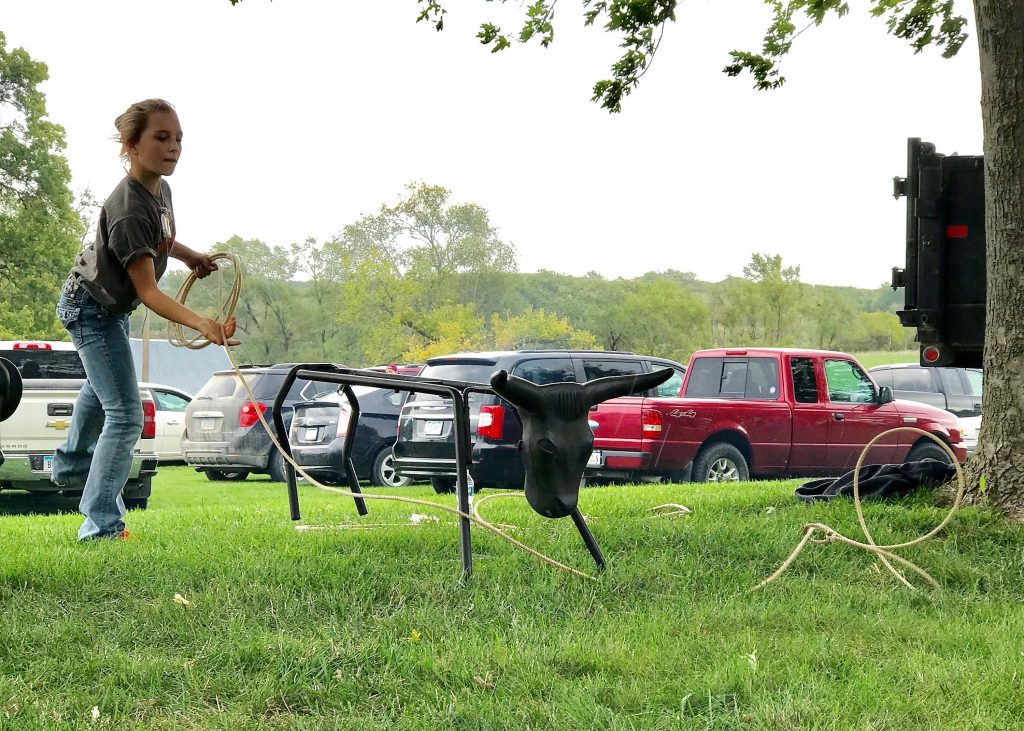 I’m sure they were present, but I didn’t see a cell phone in the hands of a single kid or student.

Heading to my car with my beef jerky, it didn’t even dawn on me that I didn’t take a single picture of the metal projects. Click on the link above to see lots of pictures of the students at work and of their art.

As I get out of my car at White Breast Pottery & Weaving, I see this … 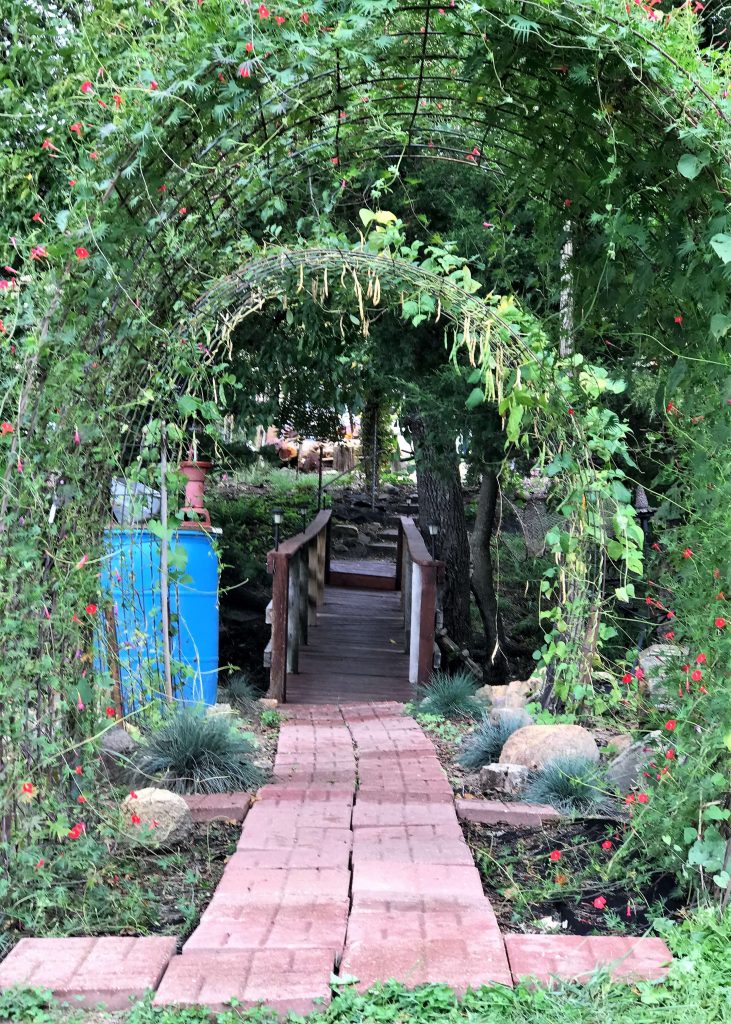 … along with a basket weaver/maker, a group of 4-Hers selling concessions and baked goods for their club, and a rug weaving demonstration. 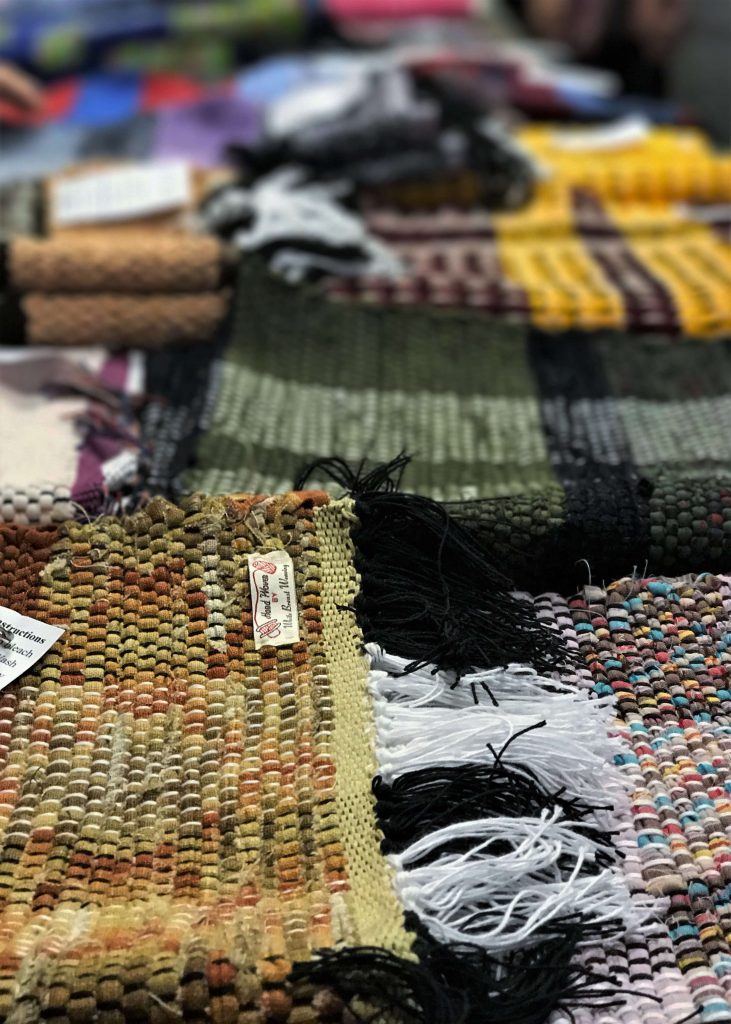 It just wasn’t possible for this 4-H girl to pass by the concession stand, so a hot dog in one hand and a beautiful woven rug in the other, I move on down the road toward the apples. 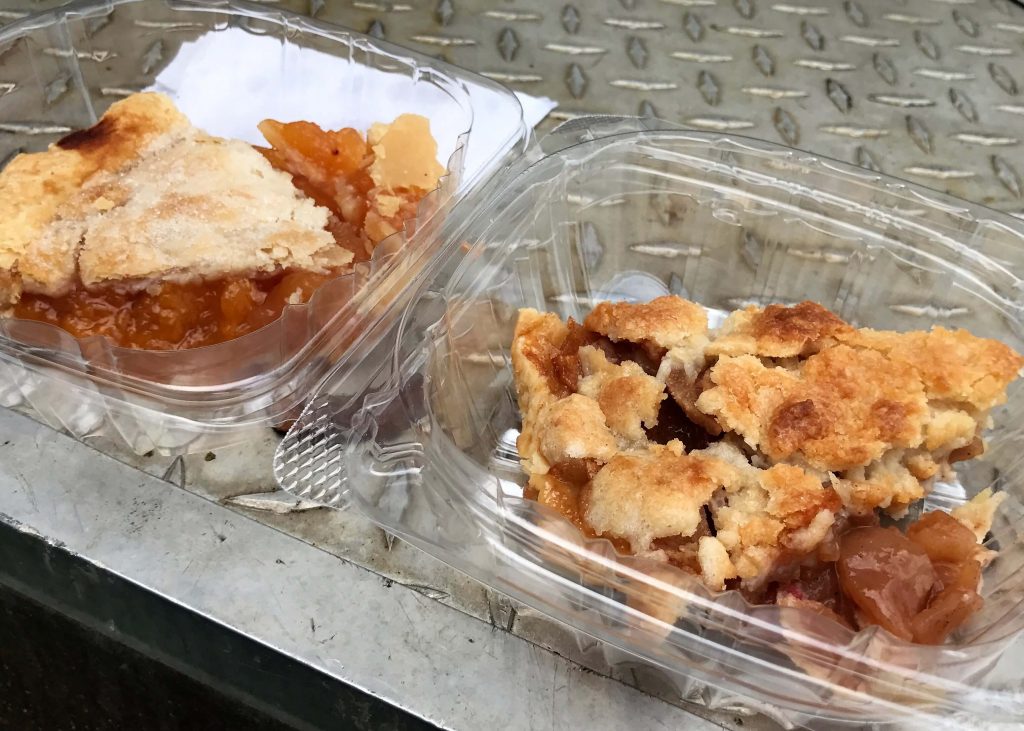 Apple pie for me, and peach for my guy at home, plus a bag of Jonathan apples (my favorite baking apples), and one or two caramels rolled in pecans.

What? It’s not like I bought the fudge too! 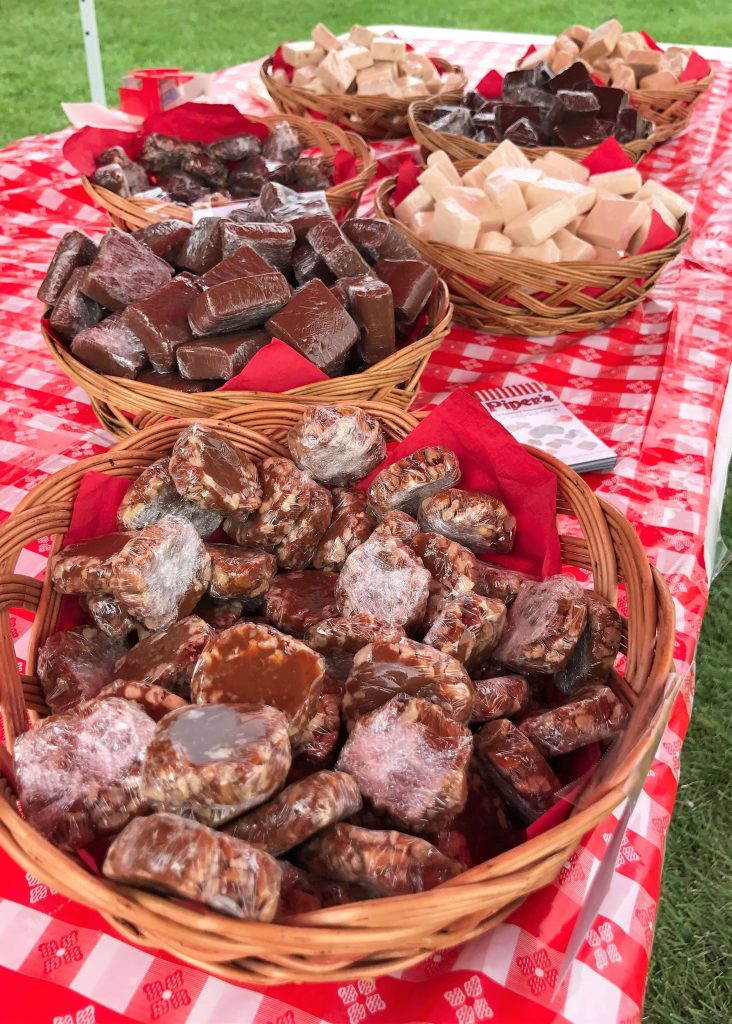 Oh, but I wanted to!

I don’t know about you, but I’m starting to get full (stomach AND car)! 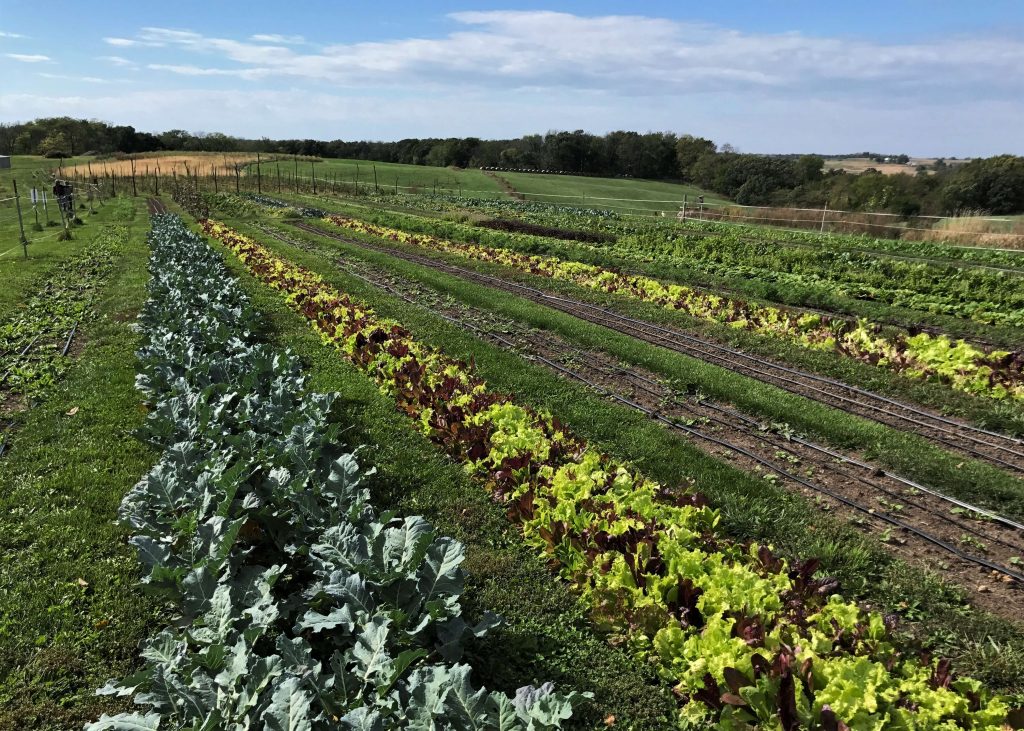 The next stop was home to the reason I was even on this tour, Blue Gate Farm. It was at their stand at the farmers’ market that I found out about the Farm Crawl. Having stopped many times before, I noticed the sign advertising the event and asked Jill about it. Her enthusiasm for the opportunity to show people their property and practices in naturally grown gardening was contagious.

I arrived too late in the day to get one of “Aunt Louise’s Cinnamon Rolls” but I was not too late to get a tour from Jill. Rotation practices, high tunnel extended seasons, 1950’s era planters and cultivators, the rabbits, alpacas, bees, and, of course, the land itself, were described with passion and pride.

Knoxville’s own Peace Tree Brewing Company was present and a “cold one” sounded really good right about then. Unfortunately, but understandably, they were sampling root beer and selling their beer (at room temperature, not cold). That “cold one” would just have to wait until I got home. 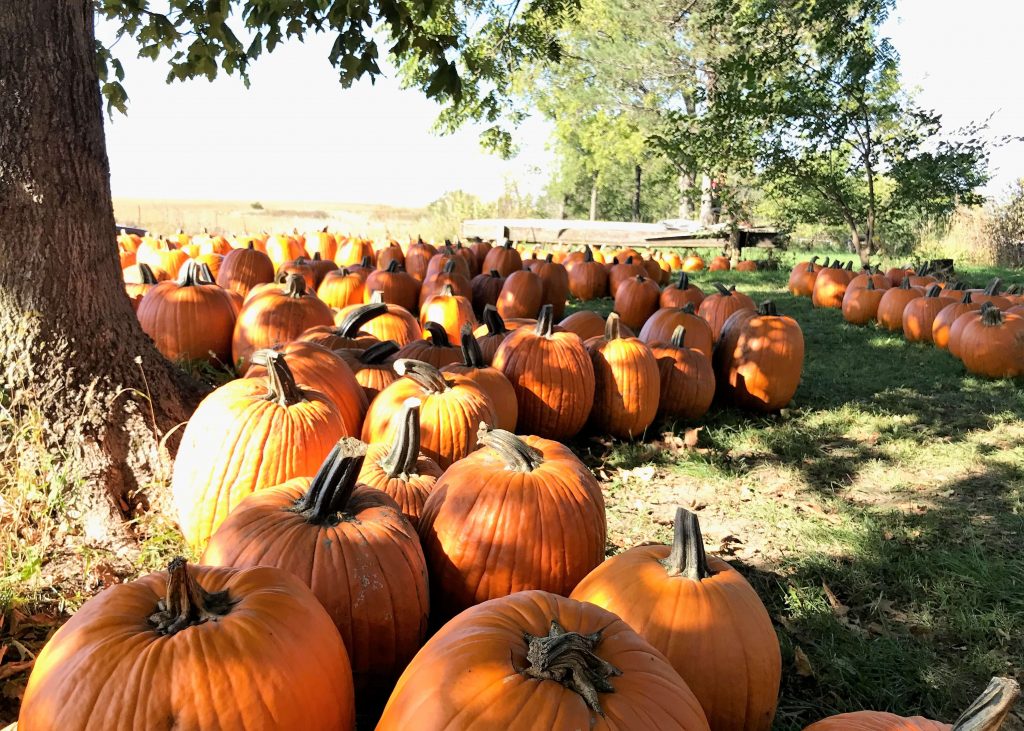 What would a Farm Crawl be without a stop at a pumpkin patch? Linus would be most content in this one. With 145 different varieties of pumpkins and gourds, your every decorating, carving, and baking need was covered. And, if feeling a little full from the other stops, the maze of giant round hay bales might just help you make room for the BBQ concessions. 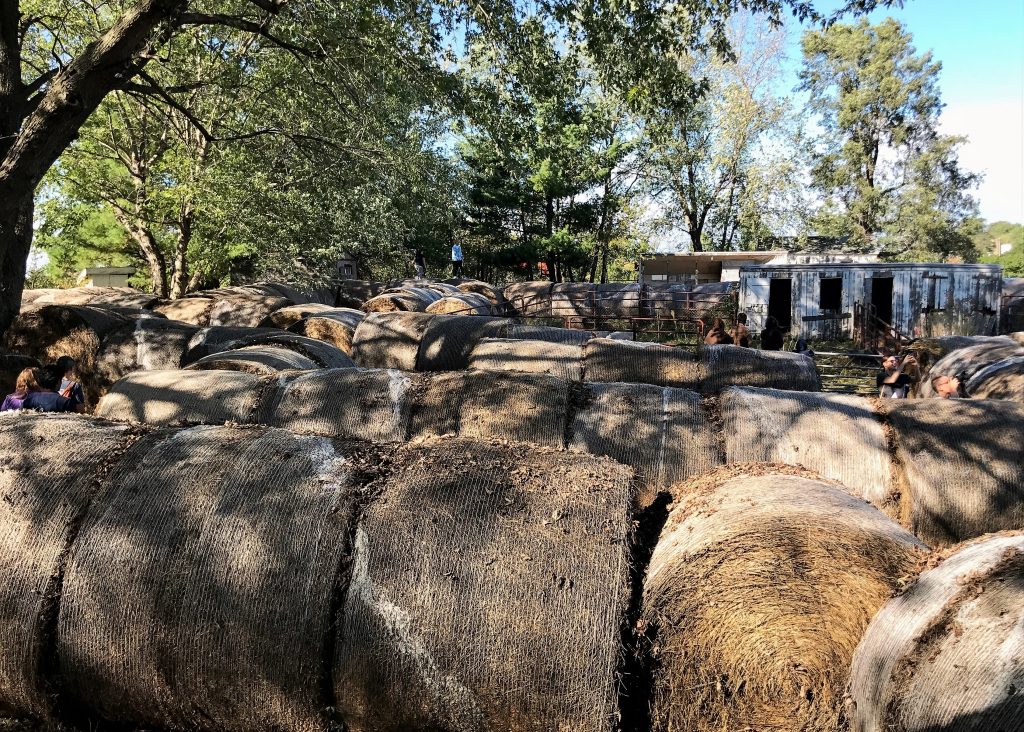 Can you find the people in the maze?

Also included in this stop was a sawmill demonstration … huge tree trunks being positioned and trimmed to fit through a machine that cut them into boards … and wine sampling from Nearwood Winery. Again, I was too late to sample most of their wines. One must be very strategic in planning your tour stops … or understanding … that works too!

My greatest disappointment in this whole tour? That I missed out on my very last stop … Crooked Gap Farm. I had been looking forward to this one for their hand-crafted soaps made from products of their farm (or as local as possible) and their cattle, pigs, and lambs. I was driving away from the pumpkin patch, looking for the next turn on the loop, and before I knew it, I missed it.

My only defense is exhaustion. It had been six hours since I left on my foodventure. I had absorbed as much information and consumed enough food in an effort to support the farms and organizations as I could and I was tired.

I think they’ll forgive me. As long as I start on their end of the loop next year! 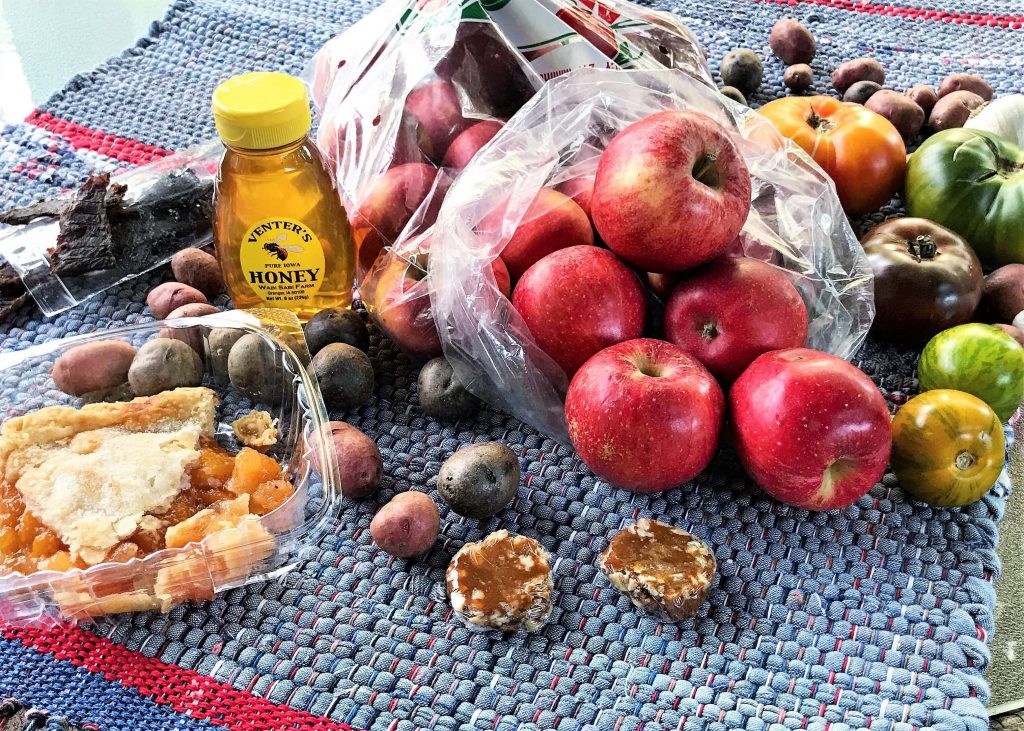 How’s that for some beautiful souvenirs?

Are you like me and disappointed you didn’t know about this years ago? At least now you can make plans for next year: