A Handful of Mixed Nuts 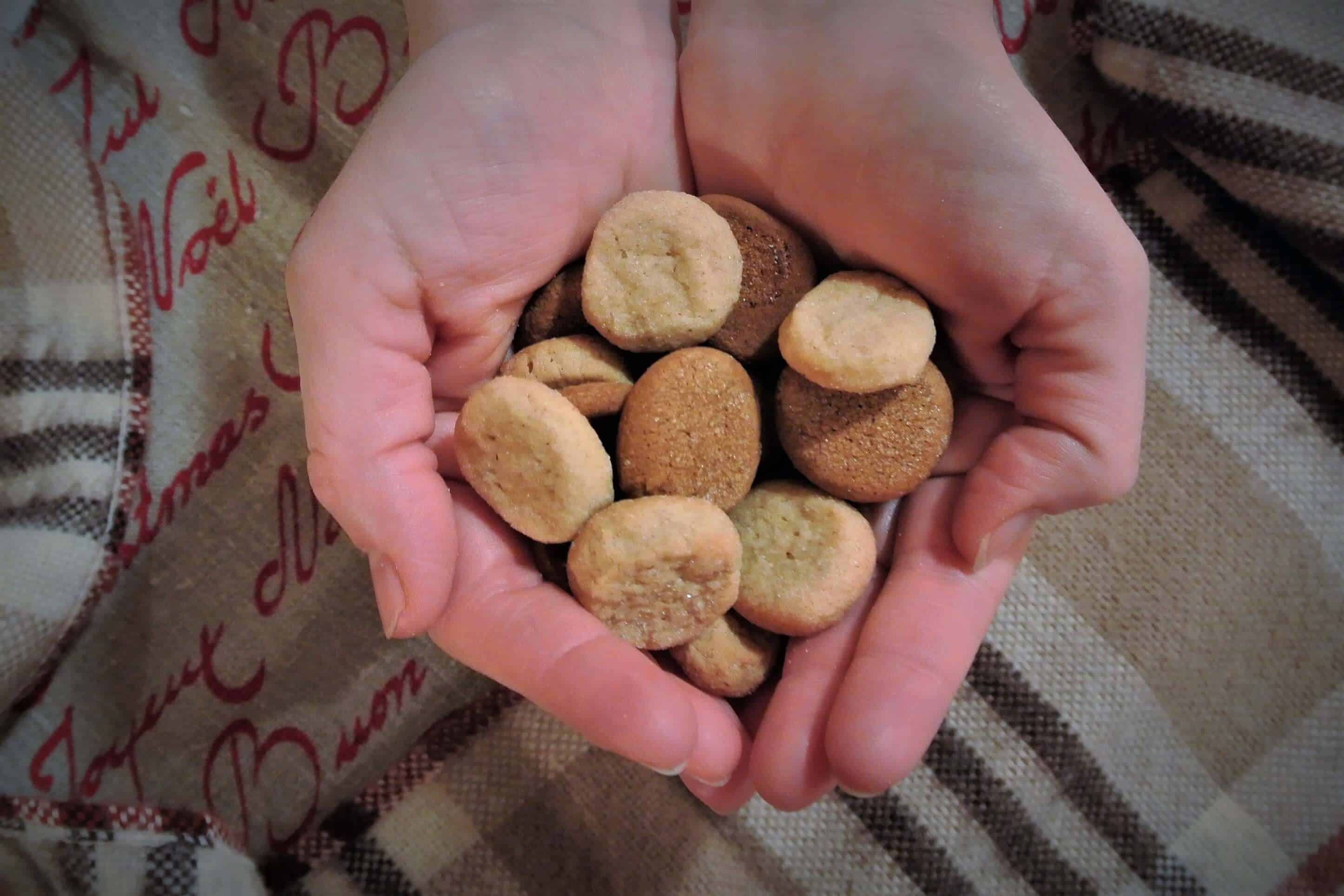 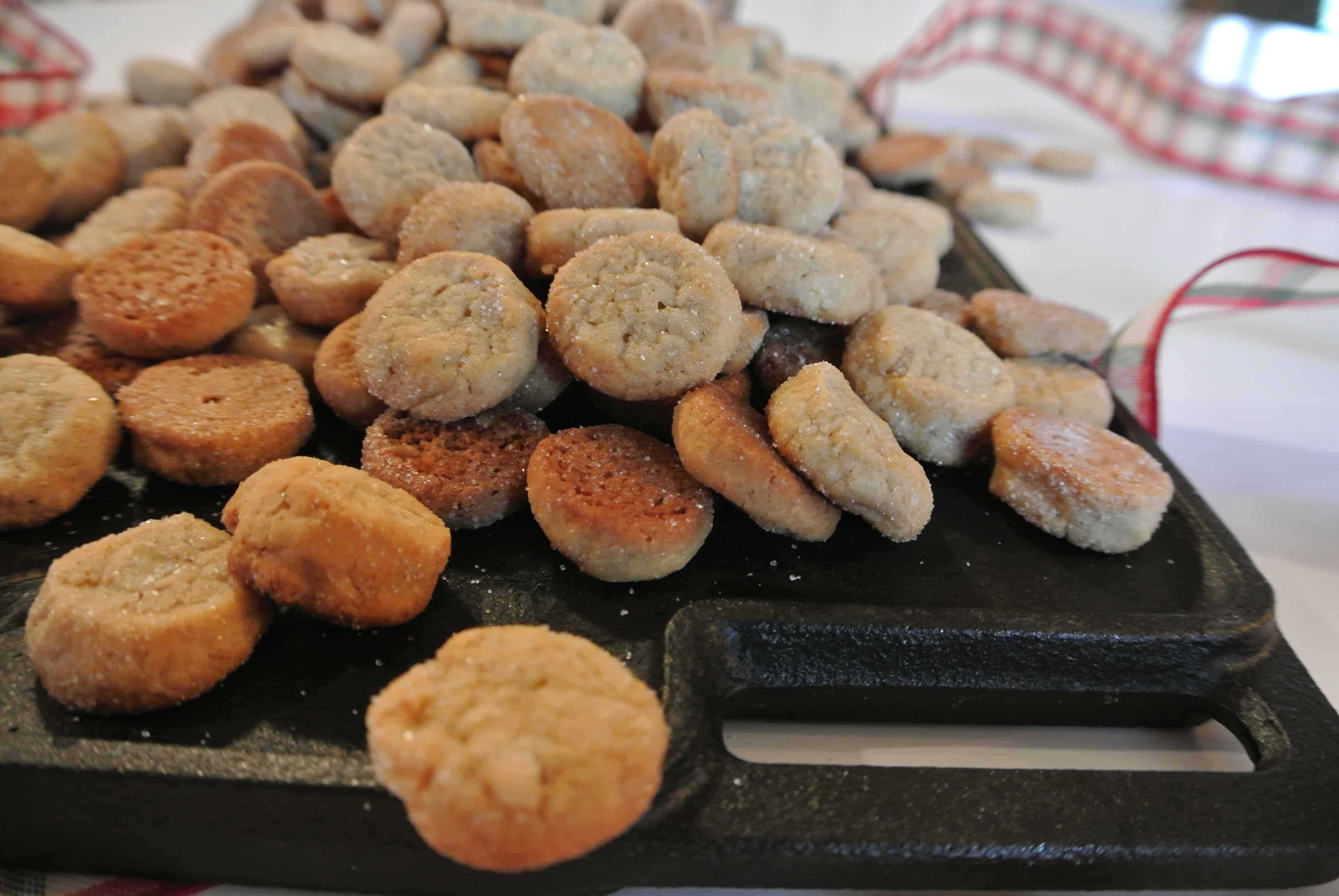 Whether they have German, Danish, Dutch, or English/American influences, these cookies are an addictive, tasty bite of holiday goodness best accompanied by coffee, tea or wine. (Yes, I know everything is better with wine but bear with me here.)

I grew up with, but failed to fully appreciate, these tiny treasures. Looking back in older versions of my childhood church’s cookbooks (1952 and 1980), there are primarily German influenced recipes with some Danish and Dutch versions as well. My grandmothers and mom recruited my help at an early age when making two different versions of peppernuts. Little hands are very useful when you are cutting 1/2-1 inch ropes of dough into 1/4 inch slices, rolling hundreds of them in cinnamon and sugar, and carefully placing them on the cookie sheet. At this young age, I was more interested in the frosted sugar cookies with sprinkles and the peanut butter kiss cookies than these spicy-sweet “nuts”.

It doesn’t take a genius to figure out that the word “peppernut” might imply a combination of “pepper” and “nuts”. What is interesting is the list of ingredients for these cookies typically excludes both. The “pepper” in the name refers to aromatic spices. Some recipes will include finely diced nuts but the reference here refers to the size of the cookies. They are meant to resemble nuts and be eaten by the handful. Can you think of a single reason I shouldn’t be completely infatuated with this concept?? 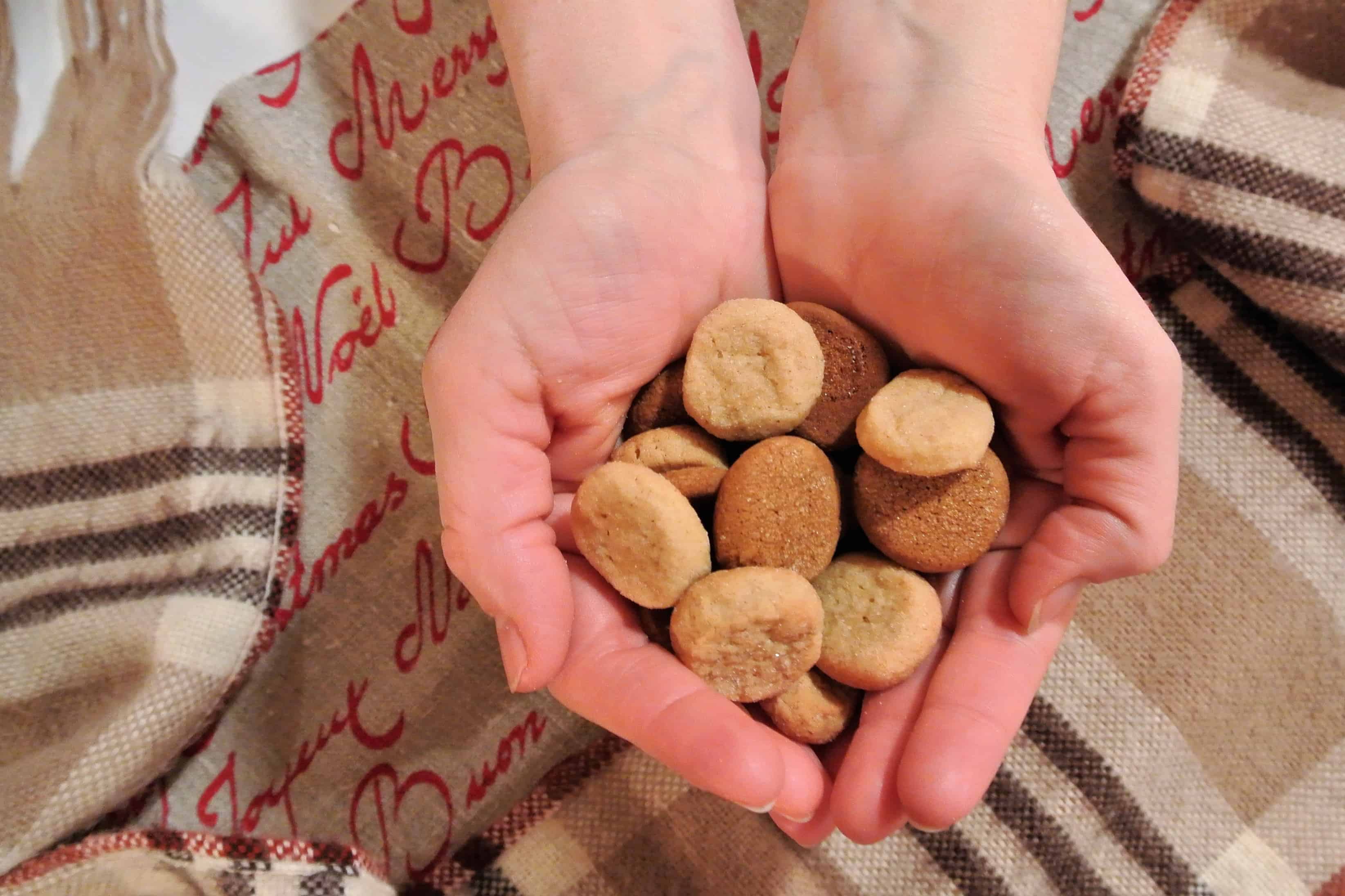 When I see peppernuts for sale in stores, they are frequently rolled in powdered sugar. This is not traditional (at least from any recipes I have found and Wikipedia agrees so it must be true). There are, however, many variations on the spice combinations, sweeteners, and additions of fruits and/or nuts. Cinnamon, clove, nutmeg, anise, ginger, allspice and cardamom all make appearances in my cookbooks. Molasses, honey, dark corn syrup, brown sugar, and granulated sugar are found in varying combinations. Until this year, I had only made or tried peppernuts without nuts or fruits. That changed when I found a recipe right next to my two go-to recipes that looked so interesting I had to try it. It had citrus peel, coffee and walnuts! (Shhh … don’t tell my grandmothers, but this might be my favorite.)

Even the choice of fat … butter, margarine, lard … makes a big difference in the flavor and texture of each recipe. If you have been following me for a while, you probably know that I have a mild obsession with lard. It probably has something to do with my Grandma Glienke’s peppernut recipe that reads “1/2 pound butter or goose or duck lard”. Yep … because everyone has goose or duck lard hanging out in their refrigerator. I wish!

Now that you’ve allowed me to ramble on the history and variations of these simple-looking tidbits, we should get started on the recipe. Time consuming? Yes. Difficult? No. Worth it? Definitely! 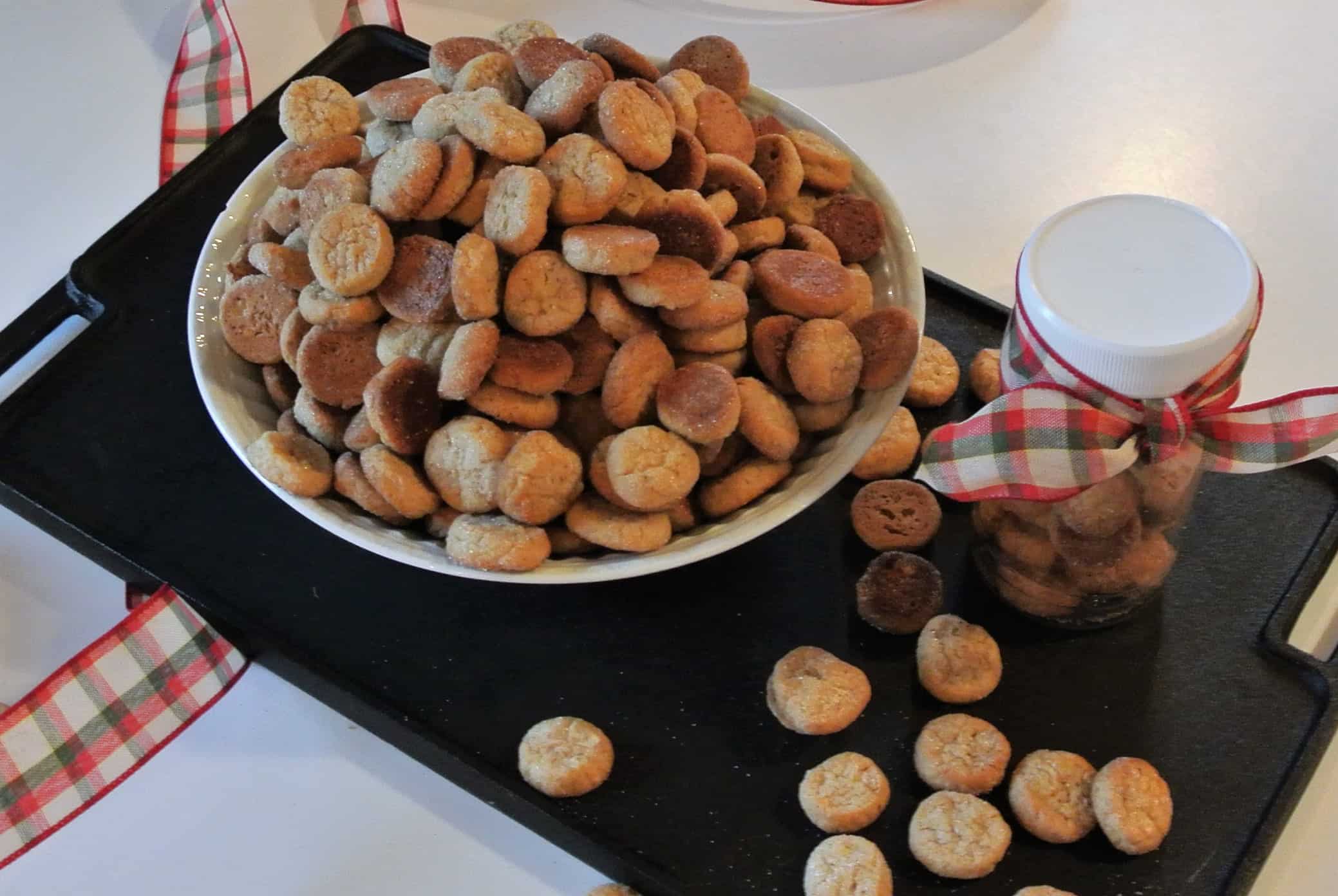 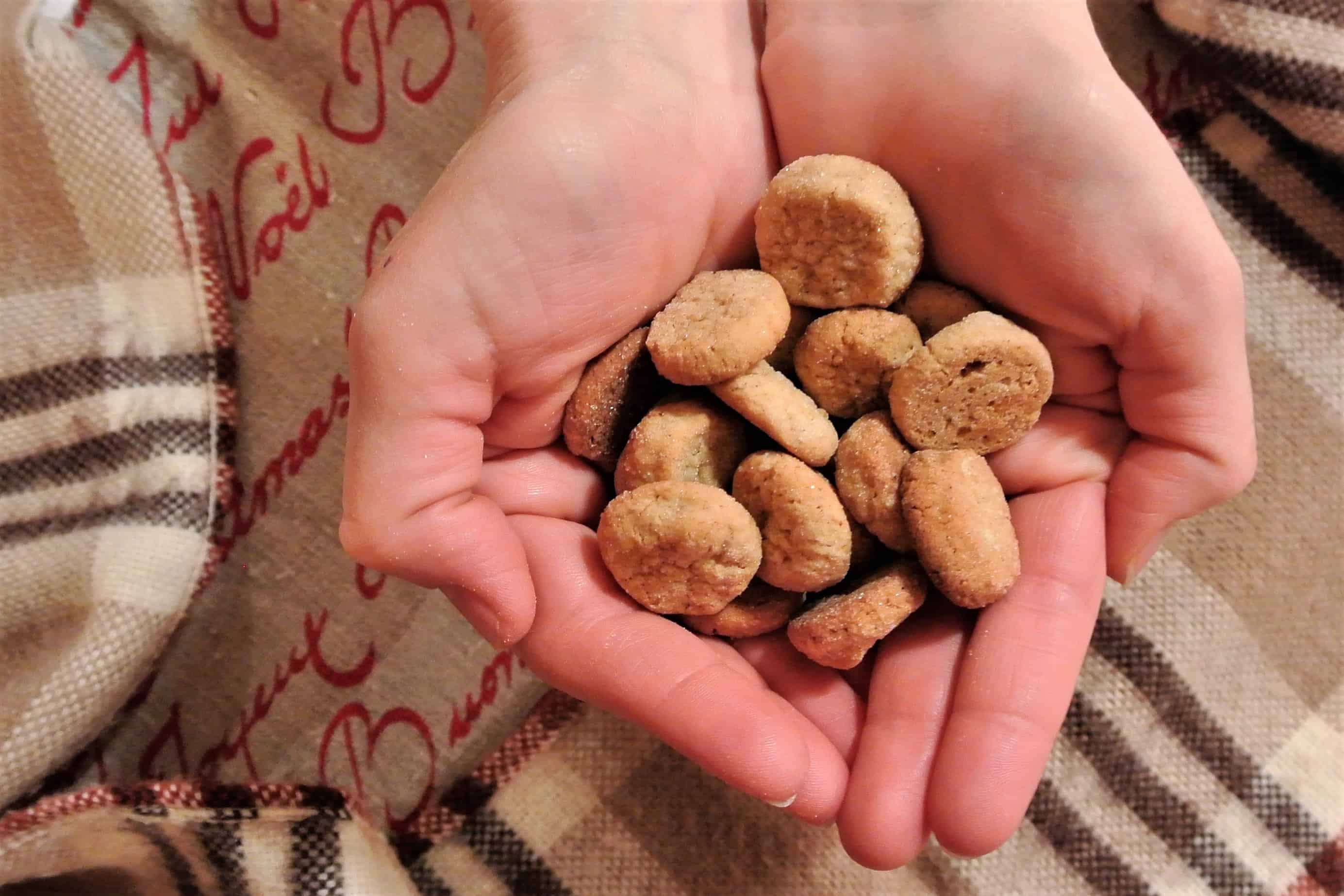 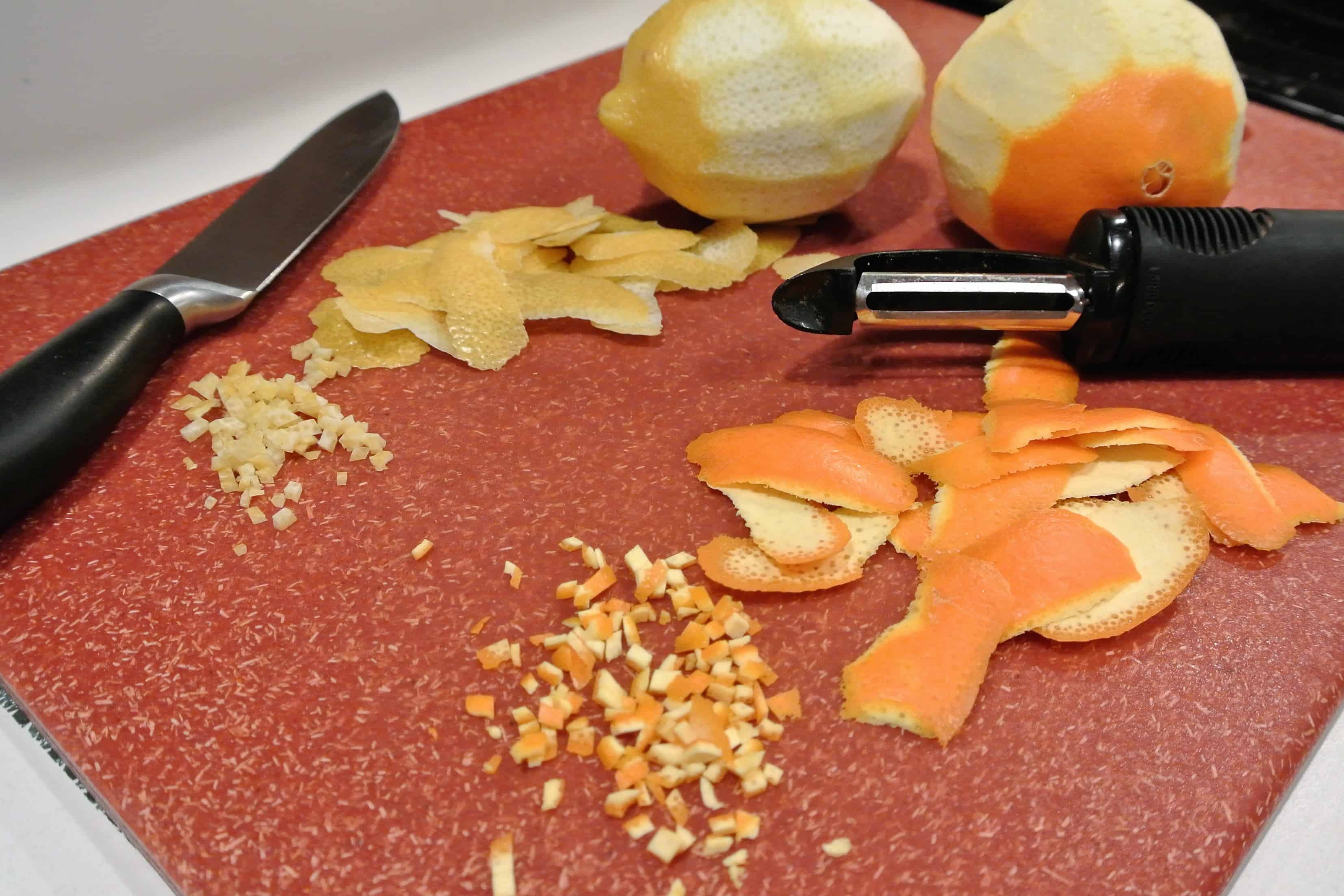 Cream brown sugar and butter together until smooth; add eggs and coffee and blend until creamy. Fold together or sift 3/4 teaspoon cinnamon, cloves, cardamom, flour and baking powder together and slowly add to batter. Remove bowl from mixer and fold in citrus peel and walnuts by hand until evenly distributed.

Roll dough into ropes 1/2-3/4″ in diameter. Wrap individually in plastic wrap or place on a cookie sheet covered with plastic wrap and refrigerate several hours.

Preheat oven to 350°. Combine granulated sugar and remaining teaspoon of cinnamon in a flat-bottomed bowl. Remove 2-3 ropes at a time from refrigerator and place on a slightly floured cutting board. Cut into 1/4″ slices, roll in sugar/cinnamon mixture, and reshape into circles if necessary. Place about 2 inches apart on cookie sheets that have been lightly coated with cooking spray (first batch may take longer as cookie sheets are cool). Reapply a small amount of spray after each use. Bake for 10-12 minutes. Cookies are done when the bottom of the cookies are golden brown. Allow cookies to cool 1-2 minutes on cookie sheet then transfer to parchment or waxed paper. Make sure pans are completely cool before refilling. 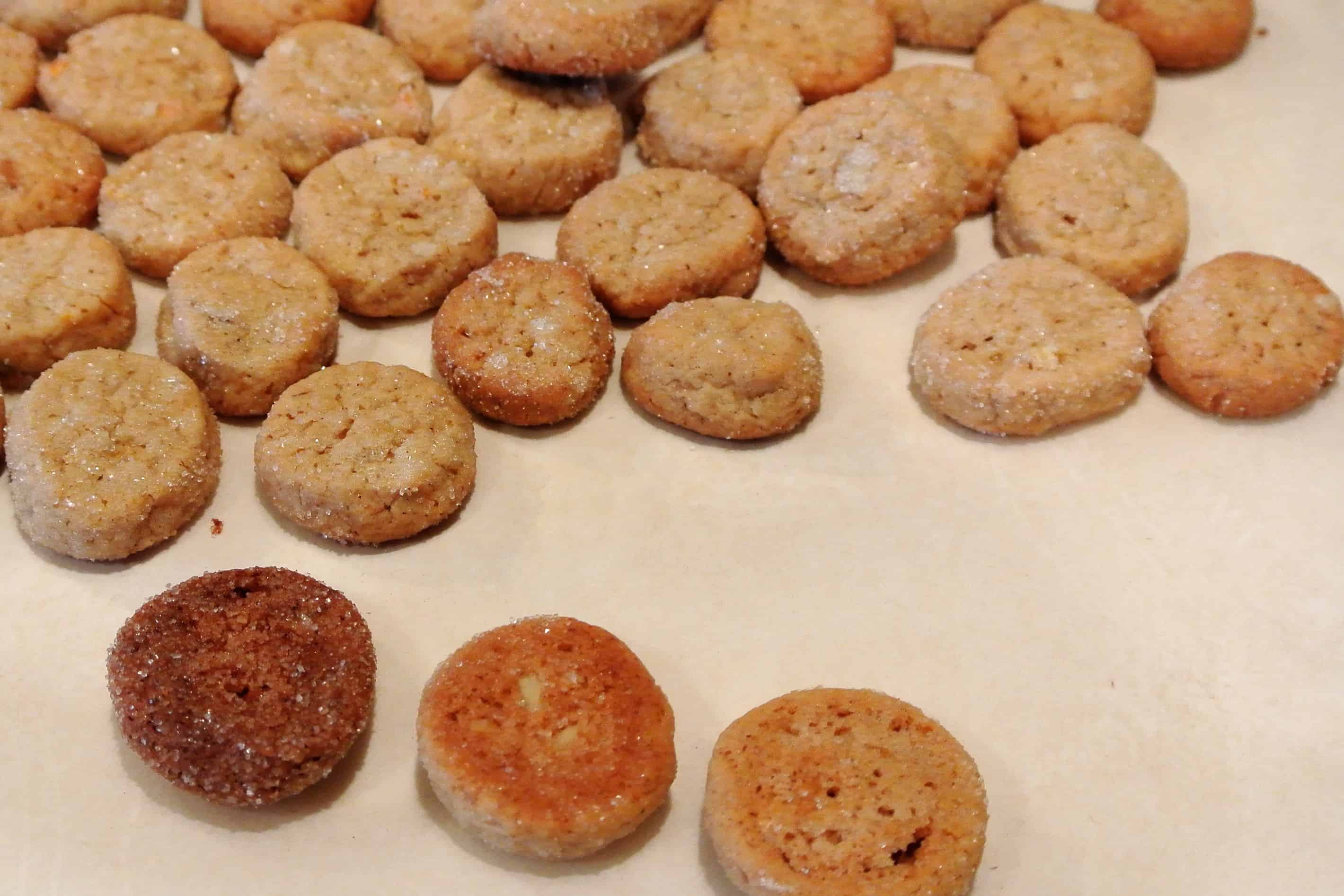 The cookies at the bottom are all from the same batch. The one on the left was baked a minute too long. The one on the right needed another minute or two. The one in the middle is perfect. Good news? None of them are anywhere close to ruined. It just makes them look more like mixed nuts!

This is the recipe for half of a batch. You can easily double it (only use 3 large eggs not 4). A full batch will over-fill a gallon-sized ziploc bag. 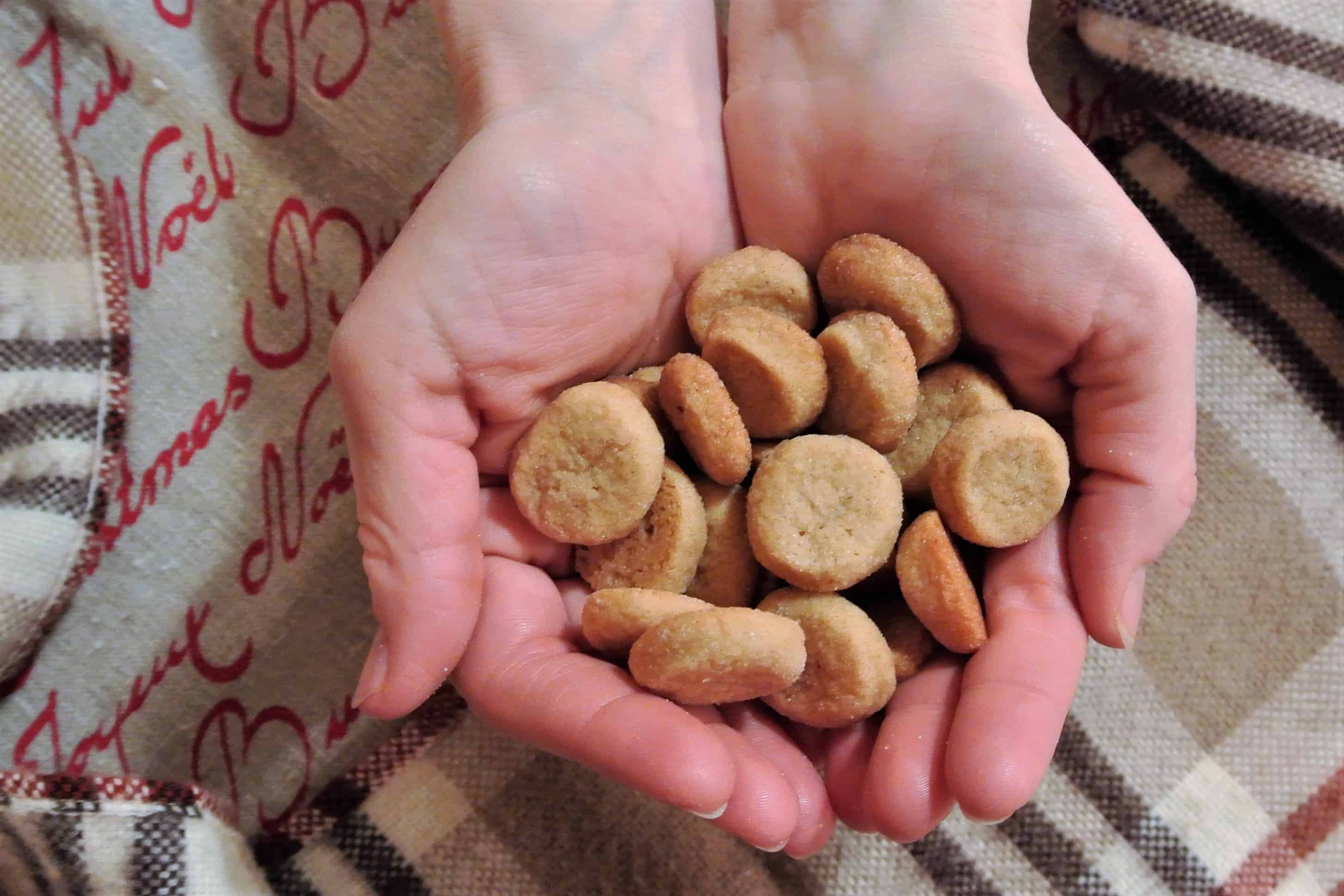 Cream brown sugar, butter, and margarine; add egg yolk and cream/milk and continue mixing until smooth. Mix in 2 cups of flour, 1 teaspoon of cinnamon and the ginger. Sprinkle the cupboard with the additional cup of flour and place dough on flour. Gently work flour into dough in a kneading motion (lifting and turning) until all flour has been absorbed into the dough.

Preheat oven to 350°. Combine granulated sugar and remaining teaspoon of cinnamon in a flat-bottomed bowl. Roll the dough into 1/2 inch diameter ropes and cut into 1/4″ thick slices. Toss the slices in the sugar/cinnamon mixture and place, 2 inches apart, on a cookie sheet that has been lightly coated with cooking spray (first batch may take longer as cookie sheets are cool). Reapply spray between uses. Bake for 10-12 minutes or until bottom of cookies are golden brown. Allow cookies to cool 1-2 minutes on cookie sheet then transfer to parchment or waxed paper. Make sure pans are completely cool before refilling.

This recipe will fill a gallon ziploc baggie about half full. 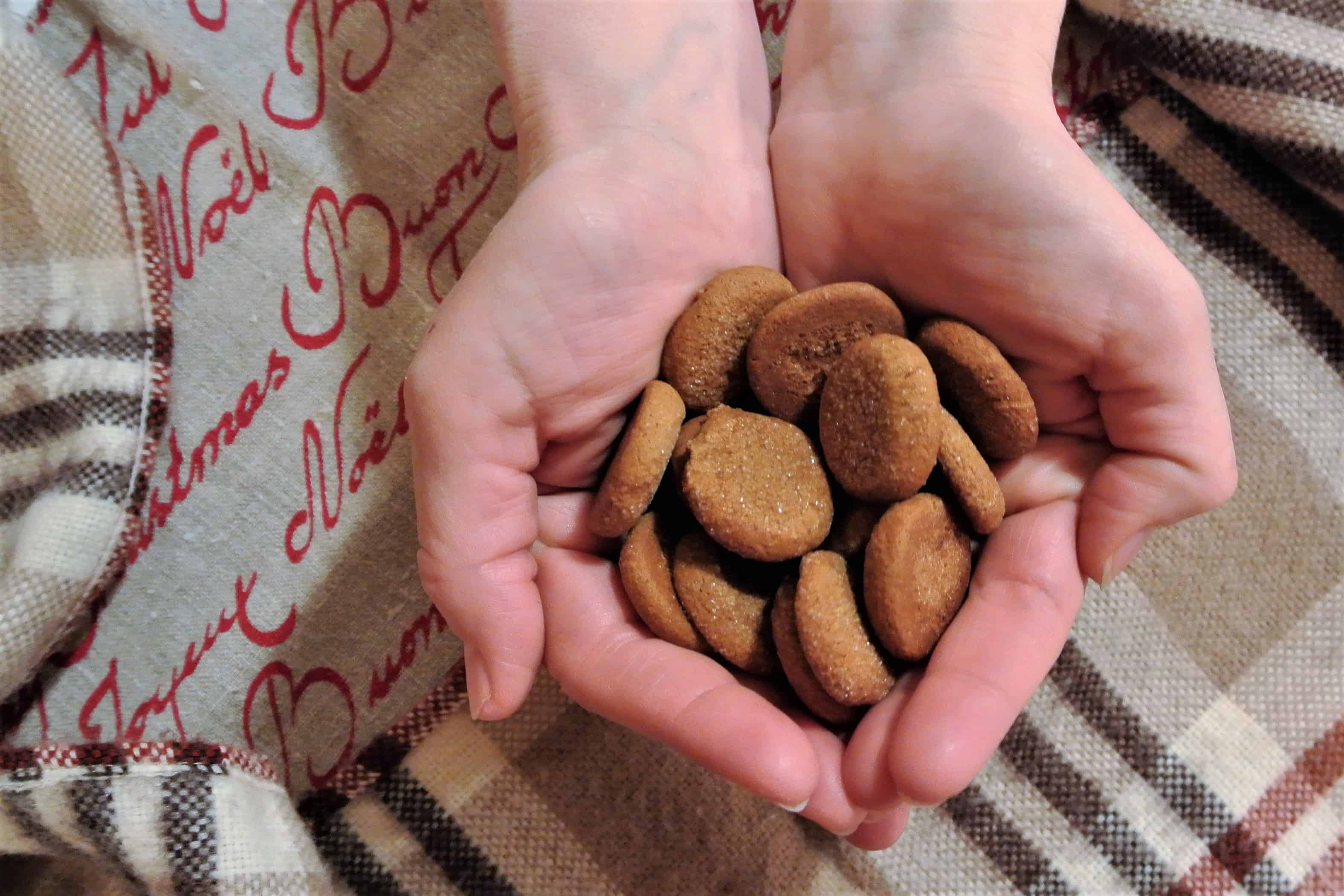 Place corn syrup, molasses, lard and 1/2 cup of sugar in a saucepan and bring to a slow boil, stirring frequently, until well mixed.  Remove from heat and stir for 2-3 minutes to cool.  Combine baking soda and boiling water and stir slowly into molasses mixture.  Allow mixture to cool to room temperature.  Sift flour and spices into mixing bowl.  Slowly add warm cooled molasses mixture with the mixer on low until combined.  Dough will be sticky.  With floured hands, divide dough into four parts; wrap in plastic wrap and let dough stand for at least one day in a cool, dry place; do not refrigerate. (This is the original instruction from the days when everyone had a cold room … refrigerating for one day is permitted.)

Preheat oven to 350°.  In a shallow pan, combine 1/2 cup sugar with 1 tsp cinnamon; set aside.  On a lightly floured surface and working with one portion of dough at a time, divide into two or three parts and roll into a 1/2-3/4″ rope and cut rope into 1/2″ slices.  Place cookies in sugar/cinnamon mixture and toss to coat.   Place on cookie sheet that has been lightly coated with cooking spray.  Bake for 10-12 minutes or until set in the middle and the bottom of each cookie is golden brown (first batch may take longer as cookie sheets are cool).  Remove from oven and allow to cool 2-3 minutes on the cookie sheet.  Remove from pan and cool completely on parchment or waxed paper.  Make sure pans are completely cool before refilling.

This last recipe is credited to my grandmother in one of those church cookbooks I mentioned earlier. I love her final instructions:

Do not freeze; store in an air-tight container in a cool place.

“These will keep until all gone.”

But once you start giving some of these little delicacies away to friends, you will not have to worry about how long they will “keep”. I like to combine all three kinds into small cellophane bags and tie them shut with cording or ribbon. As the recipient starts sampling, they can taste the subtle differences and struggle to decide which is their favorite.

6 thoughts on “A Handful of Mixed Nuts”