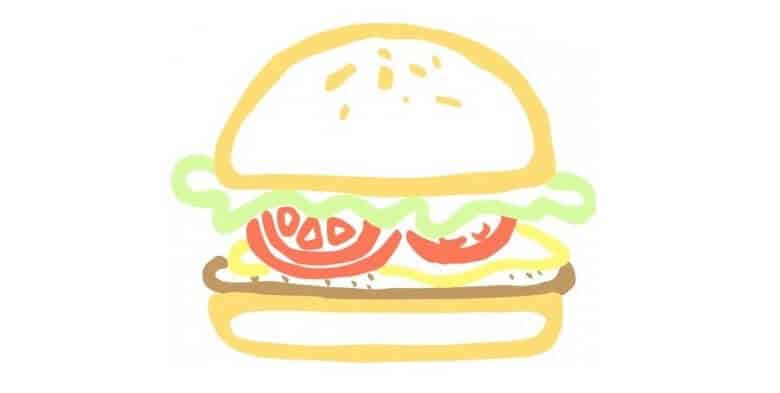 You know how innocent stories can get embellished over time?

“Back in my day we had to walk to school uphill … both ways!”

In honor of National Hamburger Day, I’m going to share one such story from my family’s history that has taken on a life of it’s own. It happened so long ago that no one remembers the honest truth. And that includes me … it pains me to admit that but I was only 5. Even that may not be the honest truth. My brothers say I was 10. THAT is a lie.

And so it begins …

As any good NW Iowa farm girl story should begin, this one starts on a hot, humid morning (probably July) in a bean field. My dad, mom, brothers and I were walking beans. For those of you who have never had the great pleasure (heavy sarcasm) of this task, it means literally walking down the rows of soybeans in the fields and removing, by hand or hoe, the weeds.

This is a lost art. I am not here to debate the use of herbicides and GMO’s in ag production. All I can say is, if you want to raise children to know phrases like “all in a day’s work” or “honest living” or “work ethic”, bean walking and detasseling corn will drive home your point quickly.

You can question the fact that a 5-year-old would be “working in the fields” but I was. I didn’t accomplish near the work of anyone else but I was out there because I could be and I could help.

Anyway, most of the time, my mom would prepare our lunch and we would eat it under a tree or in the bed of the truck. On a rare occasion, my dad would say, “Let’s grab lunch somewhere today.” This was one of those mornings. It made the work go a lot faster just knowing that we were going to be out of the heat a little early.

It was decided that we would go to a little diner, in a neighboring town, called “Elsie’s”. Instead of ordering off a menu, there was a full lunch buffet. And this was a made-from-scratch goodness from the hands of Elsie herself.

I think we all agree on this much of the story. Oh, and that the featured main dish on this buffet was Beef and Noodles.

But here is where the embellishments go crazy.

I was about 5. As I said my brothers say I was 10 but that would have put them at 18 and 19 which means they were college age and that simply doesn’t jive (now there’s a word from the 70’s). I will concede that I may have been 6 or 7 but that’s it.

We went through the buffet line and my mom noticed I wasn’t putting anything on my plate. She asked me what was wrong and I told her I didn’t like what was on the buffet. I was never a fan of things like beef and noodles or chicken rice casserole … I know, I know … these are American classics … I just didn’t like them. So she asked me what I did want and I said …

“I just want a hamburger.”

Is that such a big deal??? Really?

Apparently so. When Elsie herself came by our table to refill our water glasses, my mom asked her if it would be possible for me to get a hamburger. Elsie’s reaction was very much like the reaction one would expect if one were dining at a Michelin 3-Star restaurant and added salt to the main course before tasting it (or after for that matter). She was stunned … and offended. By a 5-year-old. Oh boy.

But, bless her heart, she made one for me. AND IT WAS AWESOME! I enjoyed every bite despite the side dish of repeated eye rolls from my brothers across the table.

As I said, this story has taken on a life of its own. I cannot begin to count the number of times I have heard the words “Can I just get a hamburger?” in a super-whiny voice or “I just wanted a hamburger!” in a demanding spoiled-brat voice. Forty-(cough cough)-years later, my nephews and my niece have adopted this story and these phrases as if they were eating at Elsie’s with us. Elsie’s wasn’t even around anymore when they were born. I will get random texts from them saying “We’re having hamburgers tonight … thinking of you!”

I guess it’s all worth it to know you are being thought of at random times and inspiring laughter. After all, isn’t that the best part of family folklore?

TRIBUTE TO ELSIE: I would just like to say a much belated “thank you” to Elsie … not just for showing compassion to a hot, dirty kid who “just wanted a hamburger” but for her years of hard work feeding the farmers and the community around Aurelia, Iowa. I didn’t expect to find anything on Google about Elsie but I underestimated its powers once again. What I did find is this tribute, and it will give many of you a trip down memory lane and others a wonderful glimpse of a place in history like Elsie’s.