Chicken Roulade with Spinach and Prosciutto 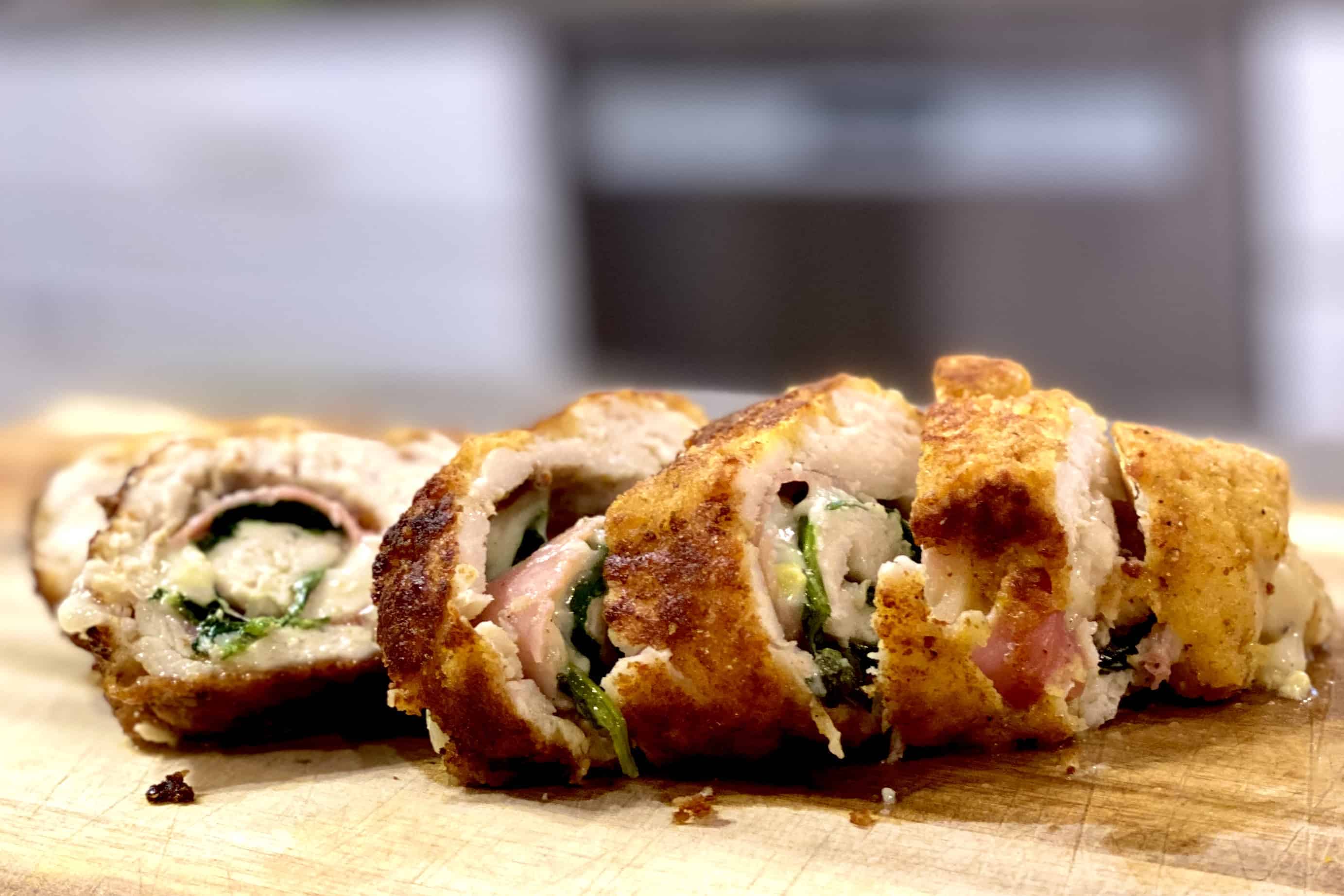 Chicken Roulade sounds fancy … and maybe a bit intimidating. It’s kind of like the first time you tried to roll up a sleeping bag: once you figure out a few tricks, the result is worth the effort! 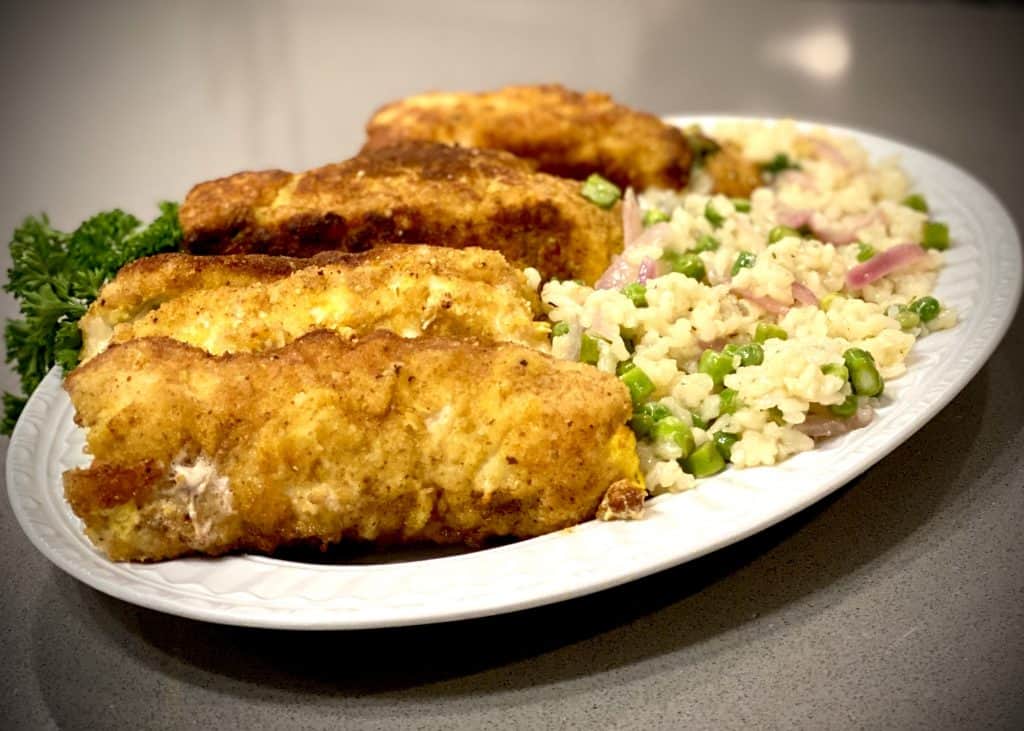 What is a Roulade?

If you’ve ever had a Swiss cake roll (a.k.a. Ho-Ho) or a ham/pickle/cream cheese roll-up (a.k.a. Midwest Sushi), you’ve had a roulade. How about a cinnamon roll? A roulade is simply a dish made and served in the shape of a spiral. The spiral is created when a thin base has been made from meat, bread, or cake, layered or spread with a filling, and rolled. The spiral, of course, makes it beautiful. But what I think is truly the secret of a roulade’s success is the distribution of flavors throughout the dish!

The focus of this blog will be chicken but many of these tips will apply to any roulade you make!

If all boneless chicken breasts were exactly the same, writing this recipe would be SO much easier. But they aren’t and it would be a great disservice to you if I wrote a recipe that didn’t account for that. As you can probably see in the recipe photos, the chicken breasts in these pictures were some of the largest I’ve ever bought. I didn’t do it intentionally. That is what was available at the meat counter on my shopping day. I have done my best to explain the process of preparing the cutlets so that you will have success with what you bring home from the grocery store.

One thing boneless chicken breasts do have in common is an uneven shape. Specifically, they are thicker on one side than the other. Since we want an evenly thin cutlet, partially filleting the thickest part will make the process much easier. The pictures in the recipe will help guide you through this process. 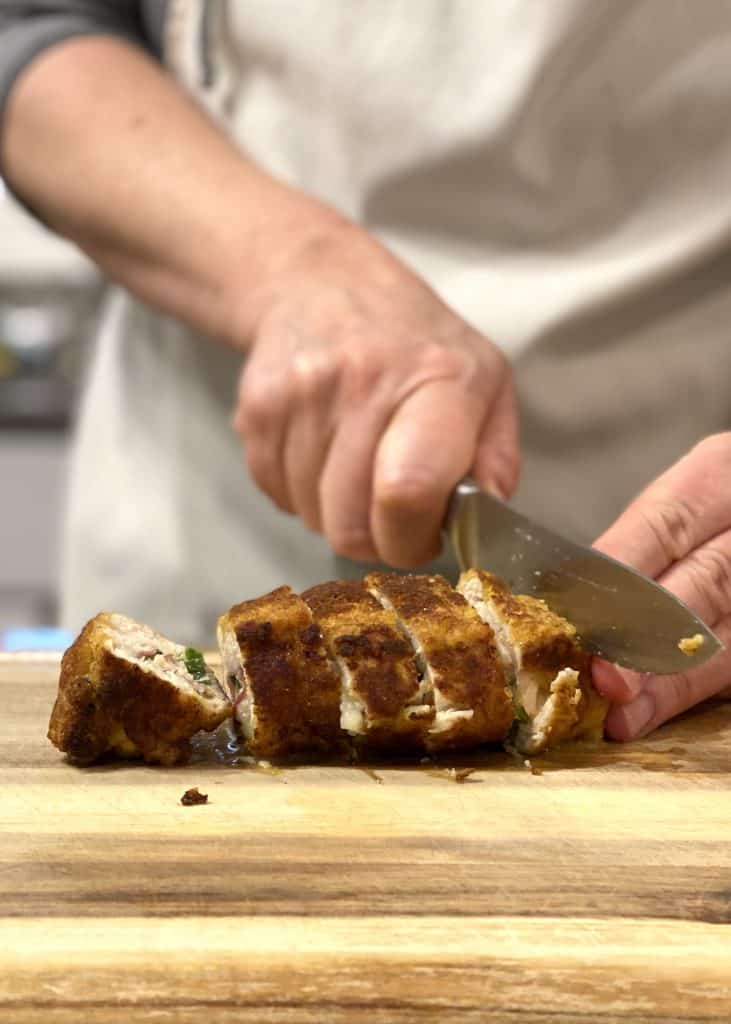 Think about your favorite chicken dishes. Do you like those chicken sandwiches with spinach-artichoke spread? What about Chicken Cordon Bleu? Does a spicy Buffalo chicken sandwich make your mouth water? With a little creativity, all of these can be made into a roulade.

Spinach-Artichoke Chicken Roulade: One way to accomplish this would be to add chopped, well-drained artichokes to the layers and use shredded Monterey Jack cheese instead of the mozzarella. Or, if you have the spinach-artichoke dip, simply spread of layer of that on the cutlet before adding more spinach and lemon.

Chicken Cordon Bleu Roulade: Replace the prosciutto in the recipe with thinly sliced ham and the mozzarella with Swiss cheese. Add some thyme and skip the basil and crushed red pepper.

Spicy Buffalo Chicken Roulade: Mix your favorite spicy wing sauce with some mayonnaise or Ranch dressing and spread a light layer over the cutlet before adding the spinach. Consider replacing the basil with cilantro and add some of the tender celery leaves. Replace the mozzarella with Monterey Jack cheese and omit the Parmesan. Take it one step further and use lime zest instead of lemon.

Thinly sliced and sautéed mushrooms, peppers and onions are always great options. If you like nuts in your chicken salad, consider replacing half of the bread crumbs with finely chopped almonds or pecans. Be careful when browning the roulades as the nuts will likely brown faster and darker than the bread crumbs alone.

Spinach Tip: Frozen spinach will work just fine in this recipe. Thaw it completely and remove as much of the water as possible.

Other Greens: The neutral flavor of spinach makes it an easy choice for most adaptations of this recipe. Other greens can be substituted but choose ones that typically hold up well to heat. Arugula, kale, and mustard greens are all good choices. Pesto would also be a wonderful option if fresh greens are not available.

We haven’t even talked about beef roulades! Or pork. Or turkey … TURKEY! Thanksgiving might look a little different with a turkey roulade stuffed with sage leaves, shaved Brussels sprouts, cranberry chutney and goat cheese … YUM!

And don’t even get me started on cake rolls! I think this recipe for Cappuccino Roulade from Land O’ Lakes is next on my recipes-to-try list.

Whether you’re craving the sweetness of a chocolate Swiss cake roll or the salty tang of a ham and pickle roll-up right now, there is a roulade for you! Might I interest you in a breakfast roulade?

Chicken Roulade with Spinach and Prosciutto

Rolling and Dredging the Roulades

Browning and Baking the Roulades

If the skillet is not large enough to accommodate all the cutlets at once, complete the browning process in two steps. Place half of the cutlets in the pan to brown. Remove the browned cutlets to a rimmed cookie sheet or stoneware pan and tent loosely with aluminum foil. Add remaining tablespoon of olive oil and butter to pan, and repeat browning process for remaining cutlets. Add these cutlets to the pan with the first and continue with the recipe as directed. In these pictures, I used a baking stone. Because stoneware requires more time to heat properly, place the stone in the oven as it preheats and remove when the first batch of cutlets have been browned. When working in batches, residual heat will continue to cook the first cutlets. Check on these cutlets after 7-8 minutes, allowing the second batch to bake for the entire 10 minutes. Browning a large number of cutlets can also be accomplished using two skillets at the same time. Simply divide the total amount of oil and butter between the two pans and proceed as instructed.
Keyword basil, cheese, chicken, prosciutto, recipe, spinach

Pin It For Later 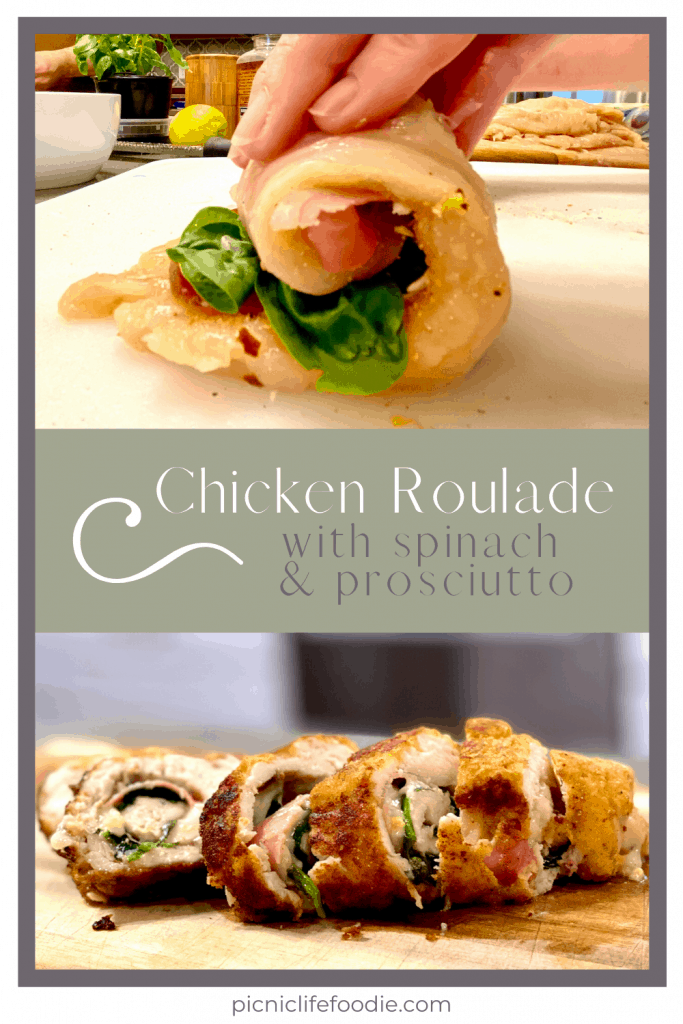 1 thought on “Chicken Roulade with Spinach and Prosciutto”