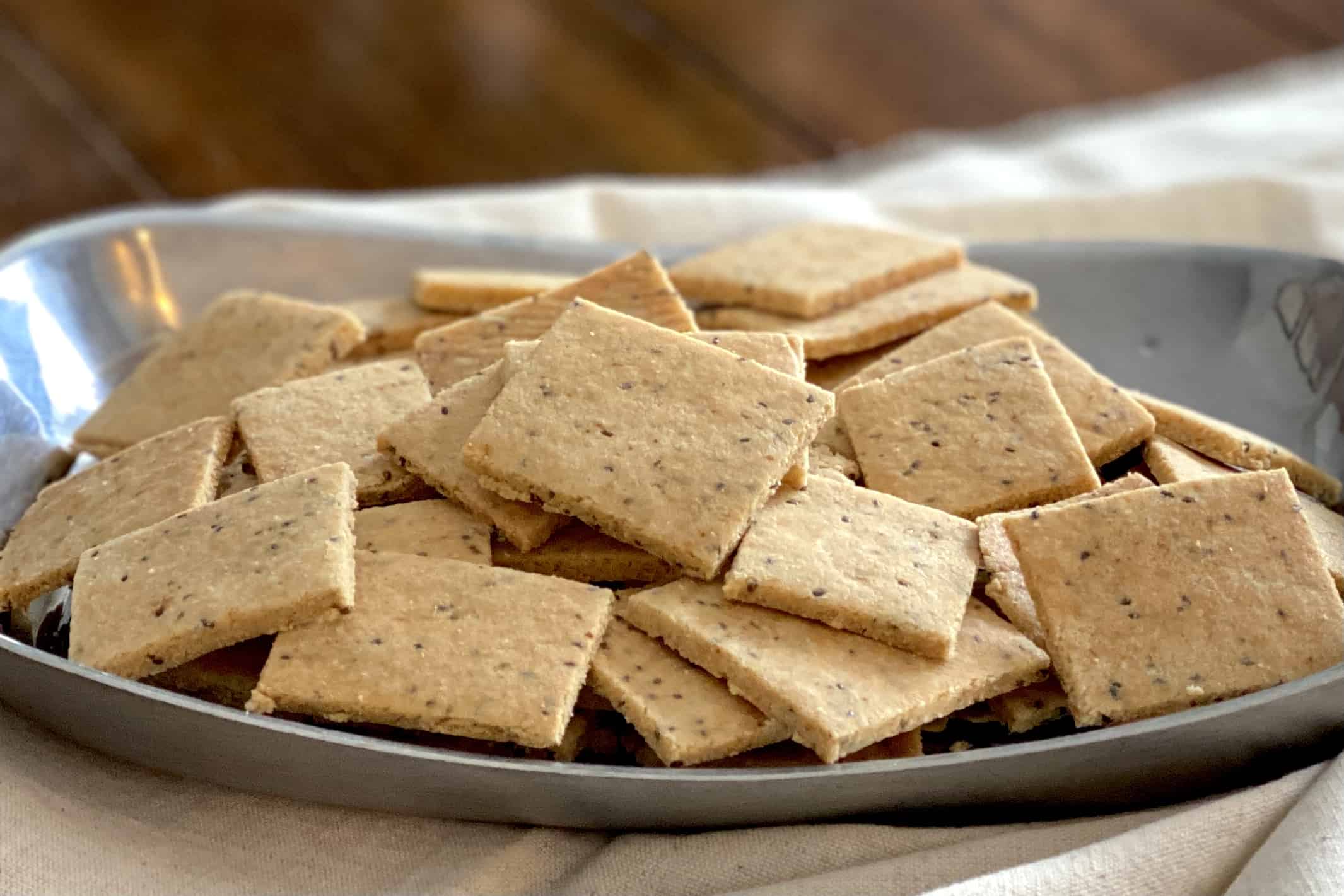 The other day, I spent some time reorganizing my collection of loose recipes. You know … those recipes that I’ve torn out of magazines, received as promotional material, clipped out of newspapers (does anyone else still do this?), or printed from a friend’s email. This sorting process serves as inspiration for new meals to try and old recipes to work into the rotation. In this pile, I found a recipe from a cooking class I took several years ago for these healthy homemade crackers. Just looking at the recipe triggered a memory of how delicious they were. So good, in fact, that I had to share! 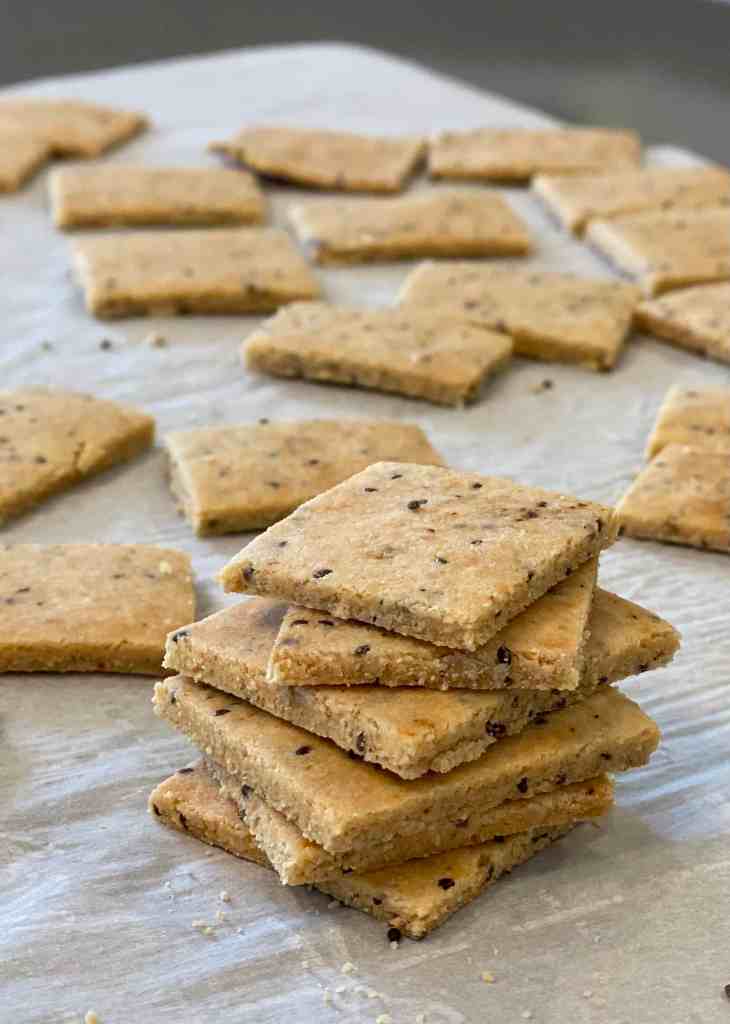 The flavor of these crackers comes from the nuttiness of almond flour, the tanginess of Greek yogurt, and the savory notes of garlic and chipotle. Chia seeds bump up the nutritional benefits of the crackers but also add visual appeal. If you don’t have chipotle powder, consider substituting a combination of chili powder and cumin. Feel free to experiment with other flavor variations like Everything Bagel Seasoning, Parmesan cheese, nutritional yeast, or Ranch seasoning. 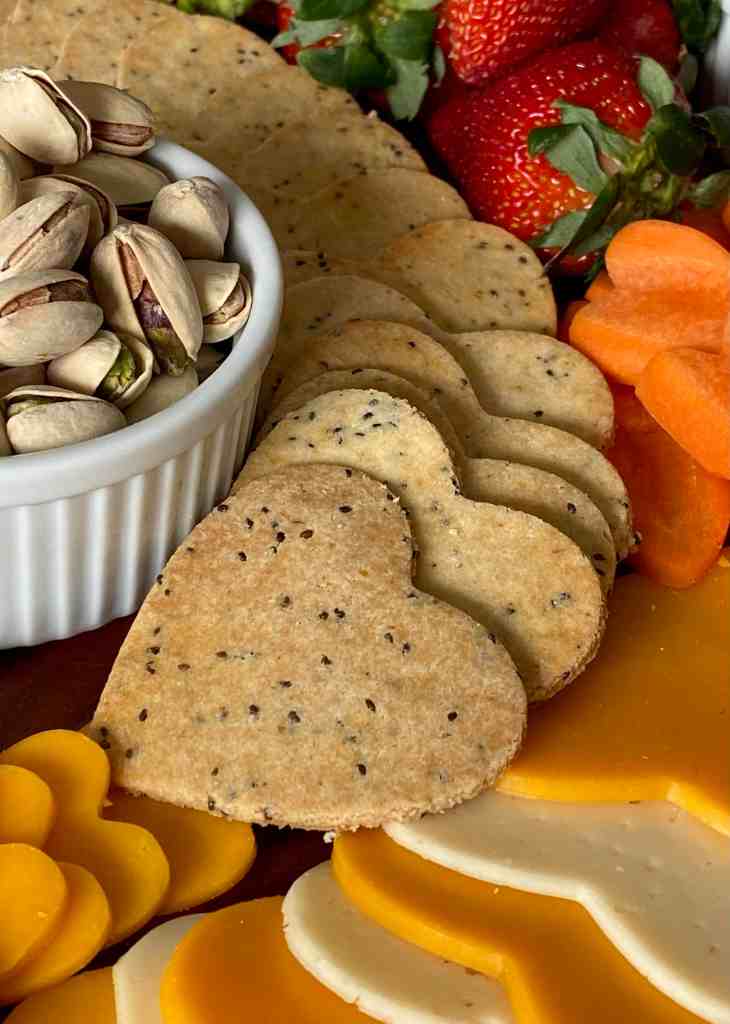 The easiest way to make these crackers is to roll out the dough and cut into squares. If, however, you want to get your fancy on, break out the cookie cutters! Roll out the dough as directed and gently transfer the cut-outs to a cookie sheet. Because there is space between these crackers, they will take less time to bake. Keep a close eye on them and remove from oven when they are golden brown and no longer soft.

The dough leftover after the first cutting can be rolled out again for another round … or two!

Kids in the Kitchen 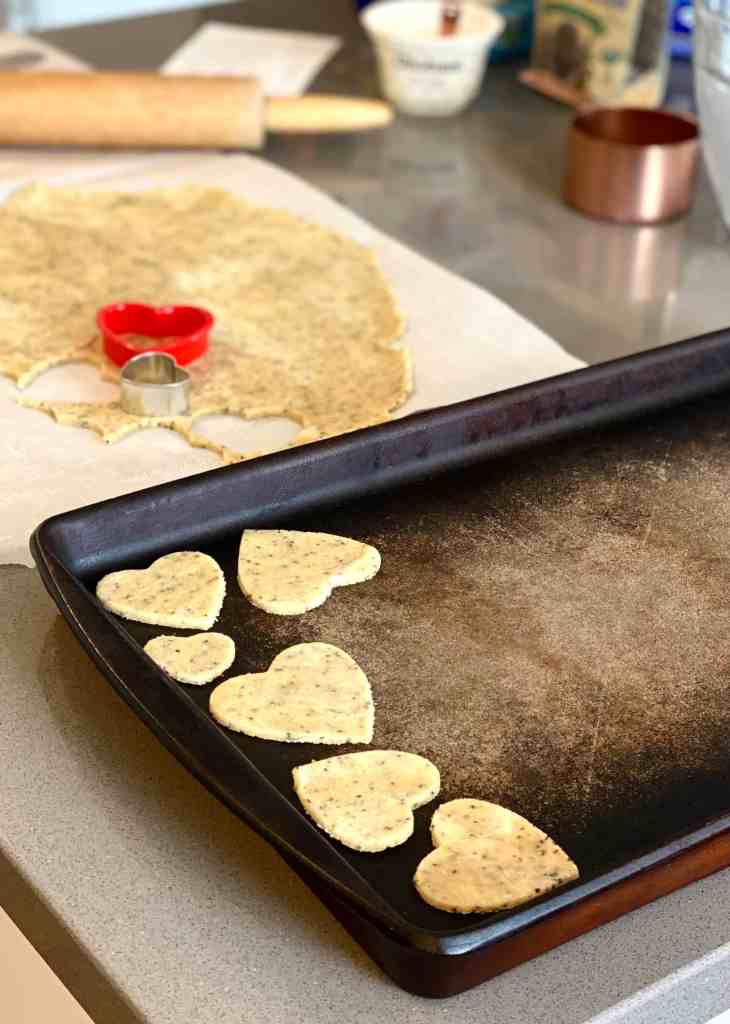 This is a great recipe to get kids involved in baking. The dough can be divided into smaller portions which will make the rolling process easier. Seasonal cookie cutters make fun shapes and can be used to cut lunch meat and cheese to go with the crackers.

The Thinner The Better 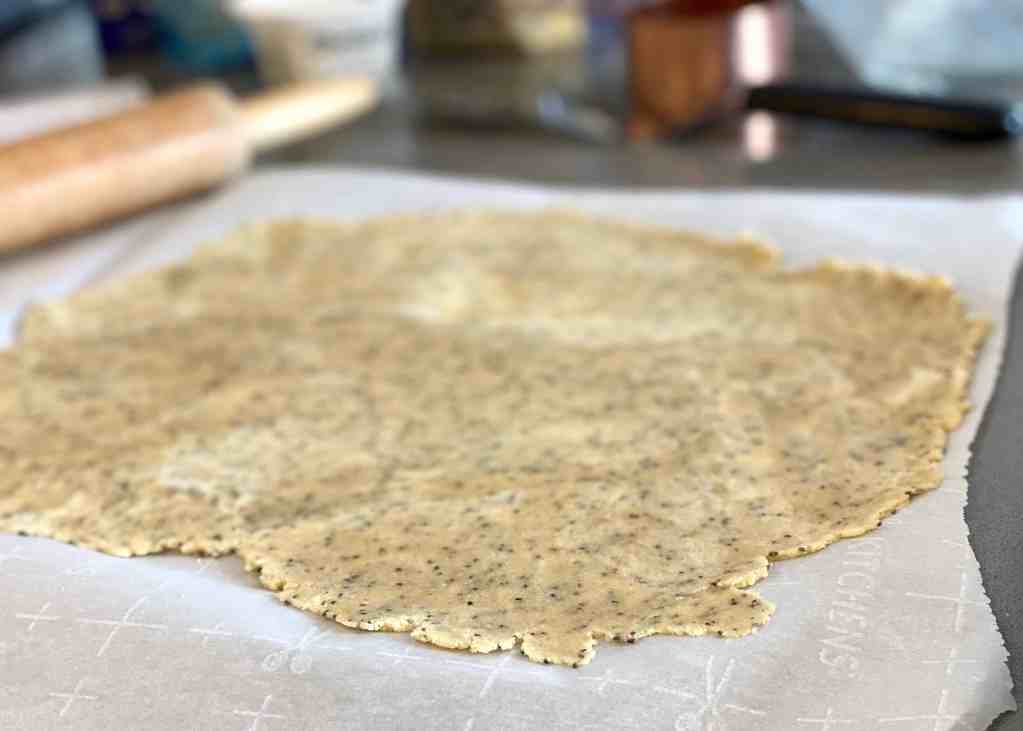 It is important to roll the dough out as thin as possible (1/8″ or less). The dough in the picture above is a good example. The crackers in the picture below were not rolled as thin (closer to 1/4″). They taste great but they took longer to bake and were not as crisp as desired.

Also, many times the rolled out edges will be thinner than the middle. The crackers from the edges may need to be removed from the oven before the middle crackers are fully baked. Transfer the edge pieces to a cooling rack and return the pan to the oven to finish baking the others. 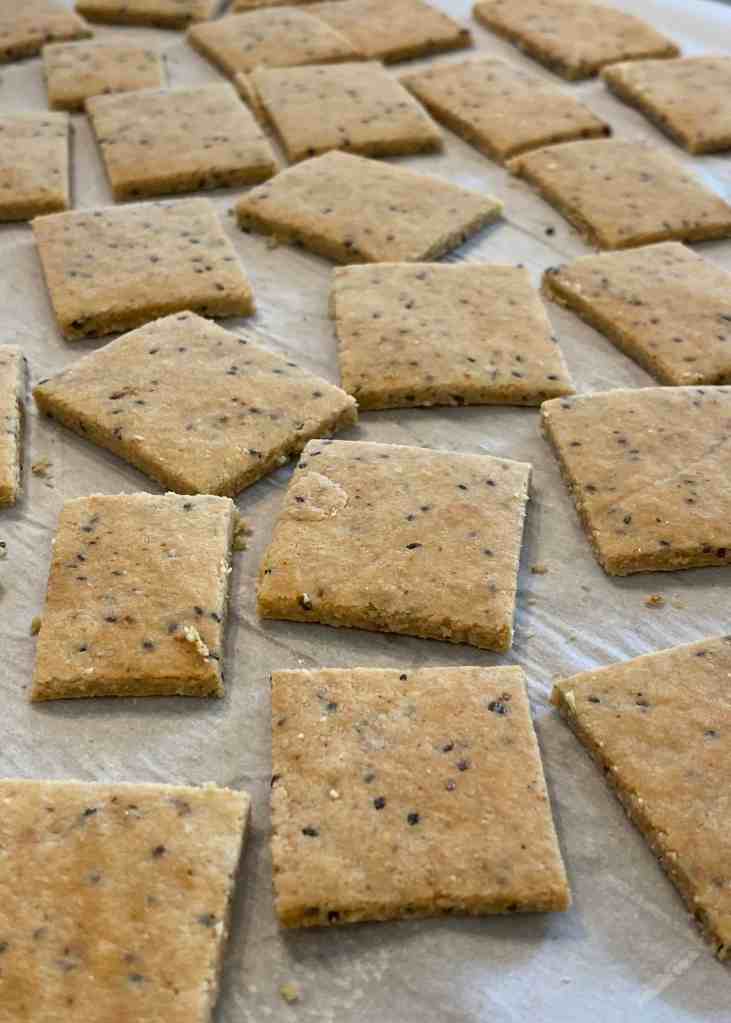 The credit for this recipe goes to Holly Houg. Holly teaches healthy cooking classes in her home in Urbandale, Iowa. She is a wealth of nutritional knowledge and a bundle of energy. You can learn more about her classes at Happiness in the Kitchen with Holly. 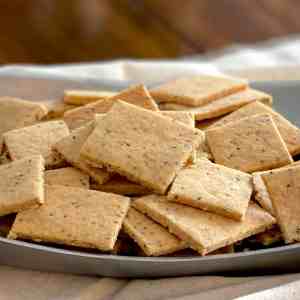 Roll out some seriously delicious crackers made with the healthiest ingredients! Your charcuterie board will never be the same!
Print Recipe Pin Recipe
Prep Time 15 mins
Cook Time 45 mins
Course Appetizer, Snack

Because these crackers have no preservatives, they are best if eaten within a couple days. That's not a problem though ... they won't last that long!
Keyword almond flour, baked, crackers, Gluten Free, greek yogurt 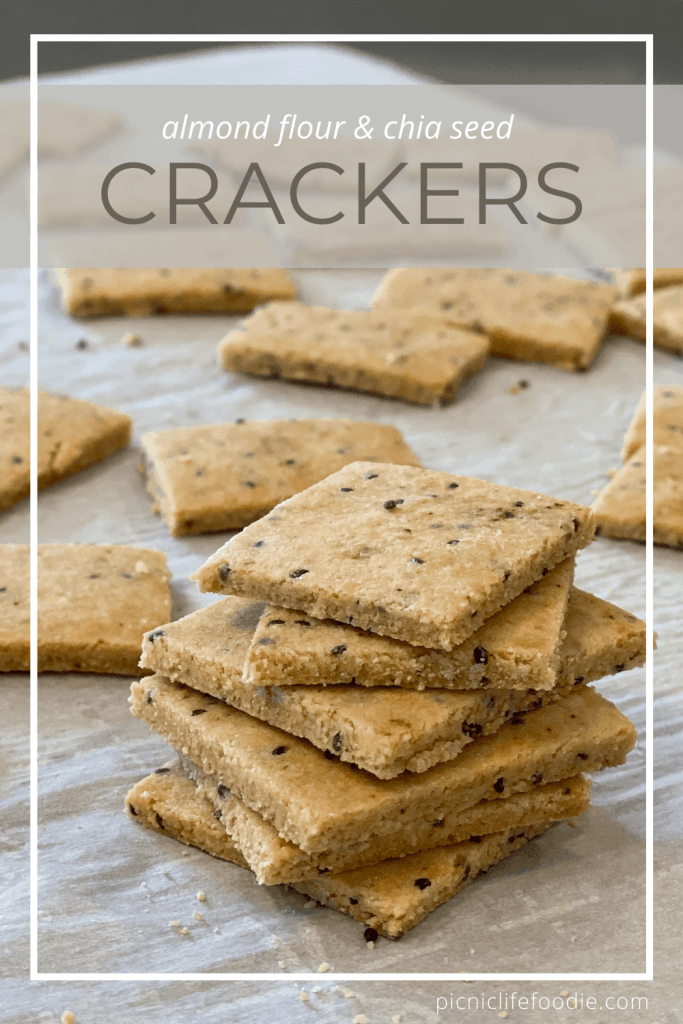