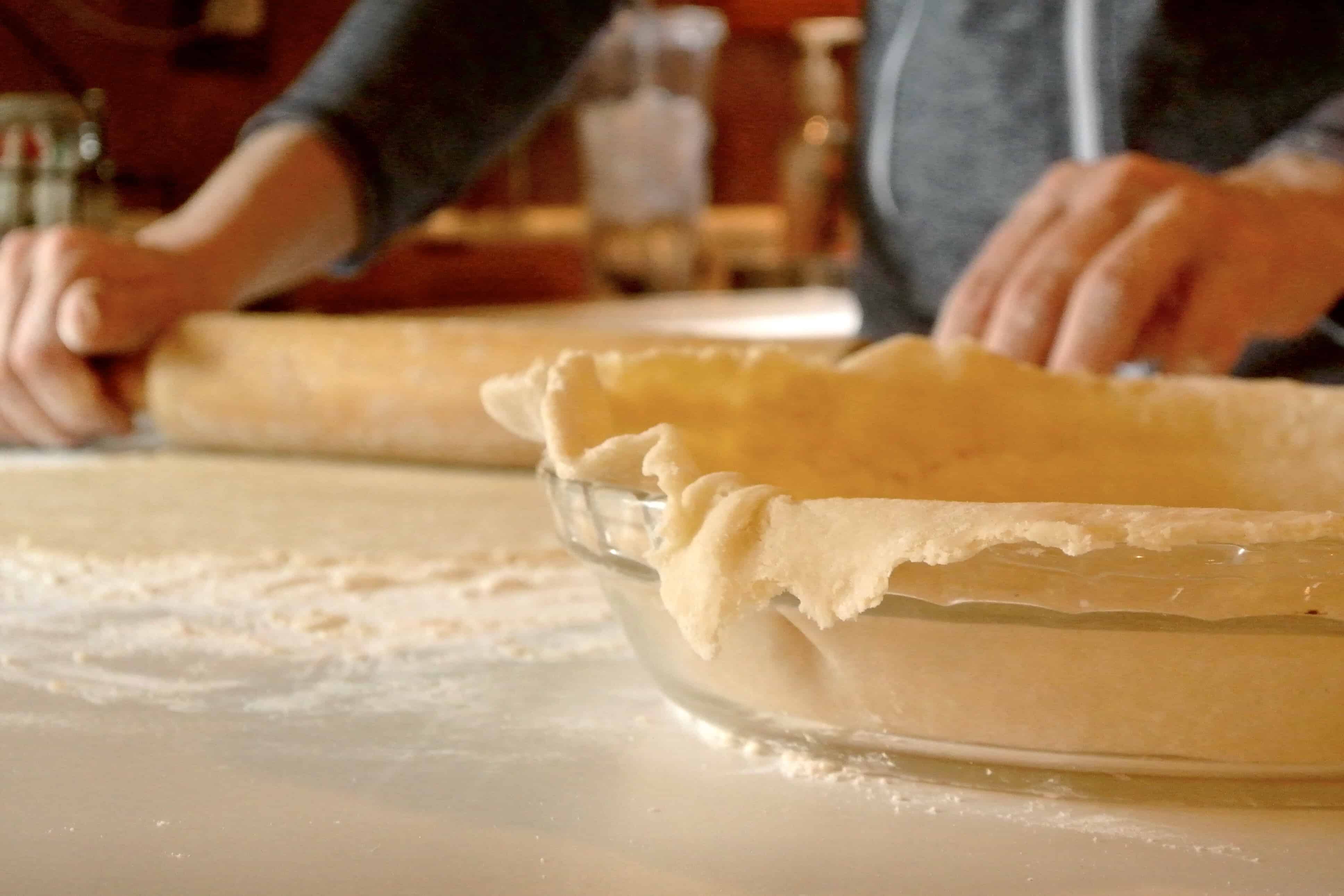 “Never Fail Pie Crust” is the actual title of this recipe. It comes from my favorite source of all good things: church cookbooks! Specifically, it is from the Centennial Cookbook of St. John Lutheran Church in Hanover, Iowa. I credit the ladies (Mrs. Kenneth Schmidt and Mrs. Wayne Radke) who submitted this recipe for all of my crust-making success. I cannot blame them for my failures because it was really only when I made substitutions based on other pie makers’ recommendations that I had disappointment and even failure.

There is one secret to this recipe and that, my friends, is LARD. I use lard in two recipes, pie crust and a particularly delicious cookie that will probably make its appearance around Christmas. When I was first married, I started making pie without the ability to ask my mom for help (well I did call her a few times). I didn’t know you could buy lard in the grocery store. I thought it only came from the butcher (farm girl). I tried substitutions. I have never been so frustrated with the effort of rolling out a pie crust! Once I explained my problem to my mom and she, very politely, told me that I could indeed buy it at the store, my frustration ended.

I have seen many food demonstrators and food network stars on television who say you should just save yourself the trouble and buy your pie crusts. I have no problem with that and I will not turn my nose up to a pie made with a purchased pie crust. That would be crazy. However, I like the process. It’s relaxing to me. Okay so maybe not the first couple of times but it is now.

Rolling out pie crust is usually the thing people struggle with the most. The tips here are:

Place the flattened disc (about 6″ in diameter) onto the floured surface and place the rolling pin across the center of the disc and begin rolling gently away from you. Pick the rolling pin up and roll again at an angle and then again at the opposite angle. Flip the dough, adding more flour to the cupboard. Continue rolling in different directions until the dough is an even thickness and about 10″ in diameter. Add more flour to the rolling pin whenever the dough begins to stick to it. Pick up the crust, scatter more flour under it, flip it over and begin rolling again until it is even in thickness and about 12″ in diameter. Hold the pie plate over the circle. If the dough extends a couple inches beyond the edge of the plate, no more rolling is needed. If not, roll a few more times, thinning it out a bit more.

If the crust tears it is not a crisis. Wet your fingers with a little water, reposition the torn pieces to overlap slightly and press them together using the water as a paste. 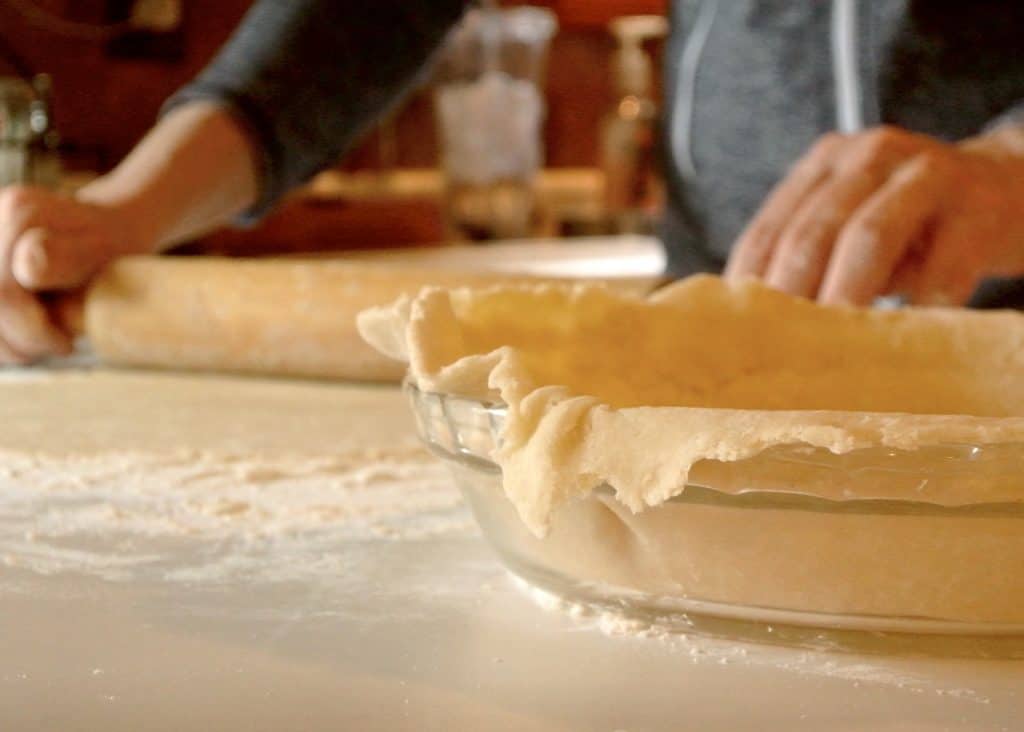 Fill the bottom crust with your pie filling and roll out the top crust. It does not need to be quite as big as it does not have to cover the inside of the plate. Just measure it again by holding the pie plate over it to make sure it reaches the edges. Dip your fingers in the water and lightly coat the outer-edge of the bottom crust to help hold the bottom and top crusts together during baking. Transfer the top crust as before and lay it on top of the filled plate and gently press the two crusts together along the edge. 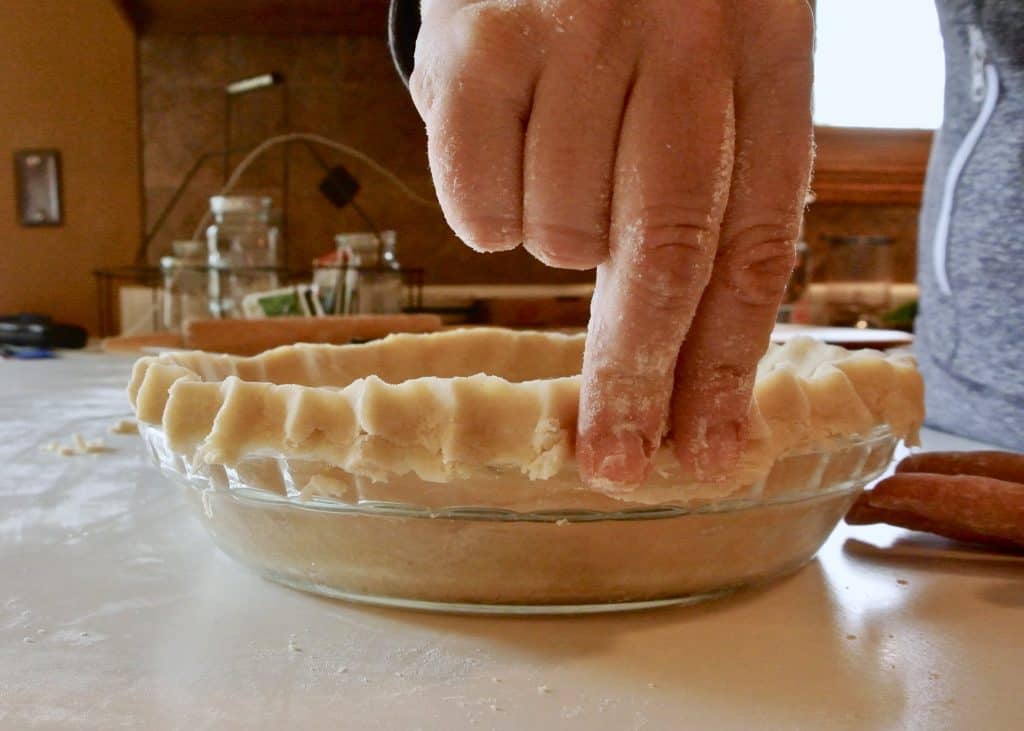 There are many ways to pinch or seal the crusts. I like the pinch method as shown in the video. Many people use a fork to press them together or various pinching methods. The important thing is to make sure the two crusts are well sealed to keep the filling from oozing out. Sprinkle a little water and then sugar on the top crust and cut small slits with a knife to release the steam during baking.

Follow the baking instructions of the filling recipe. Typically, I will bake a double-crust pie for 10 minutes at 400 degrees and then reduce the temperature of the oven to 350 degrees and continue baking for 40-50 minutes or until the filling is bubbling a little through the slits in the top crust. 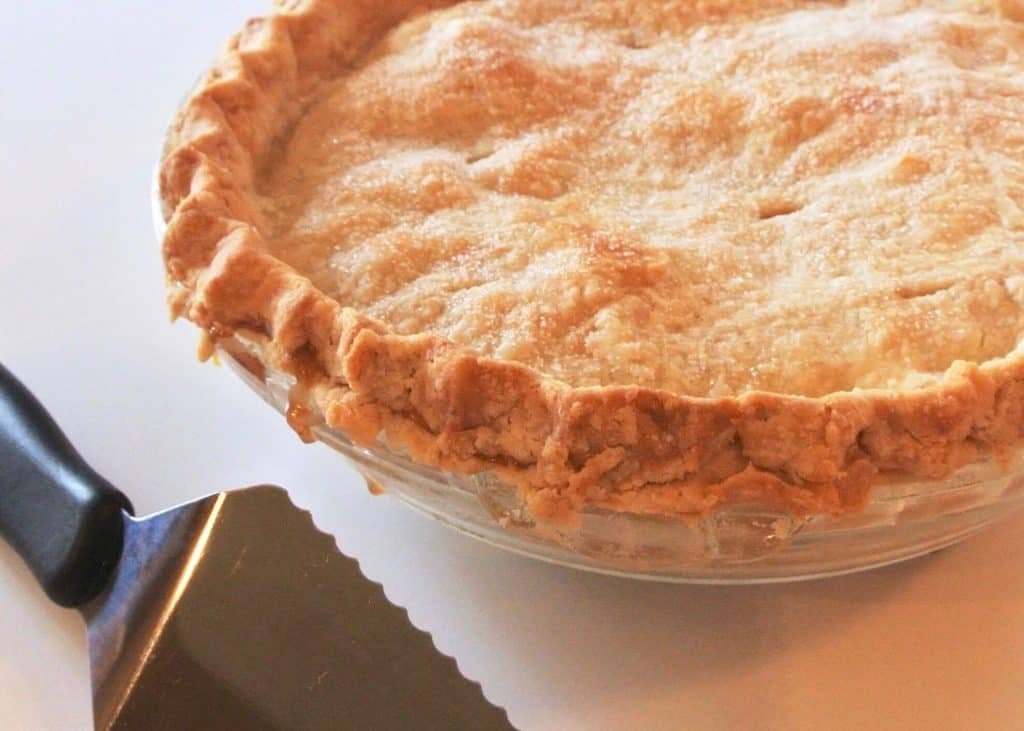 If you are still feeling intimidated, maybe it would help to read about one of my worst pie failures: Cherry Pie Soup. Give yourself a break and try this Never Fail Pie Crust recipe.

Just don’t try it for the first time when you are hosting company for dinner. 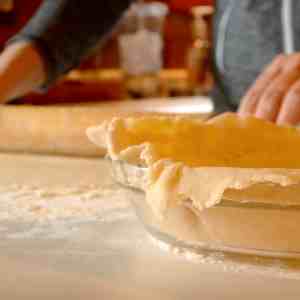 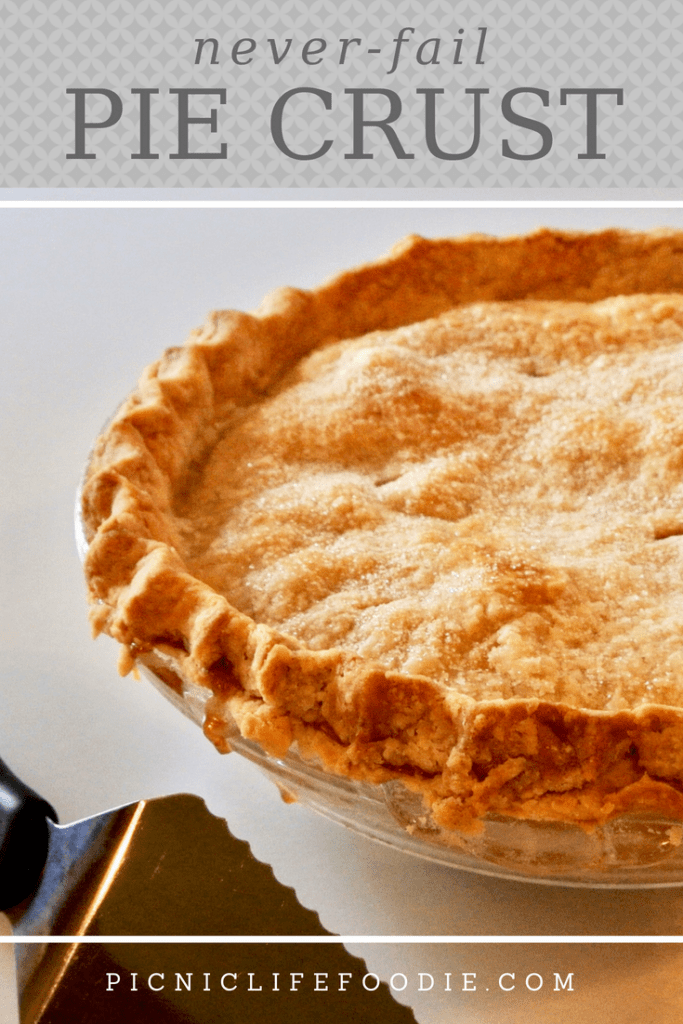