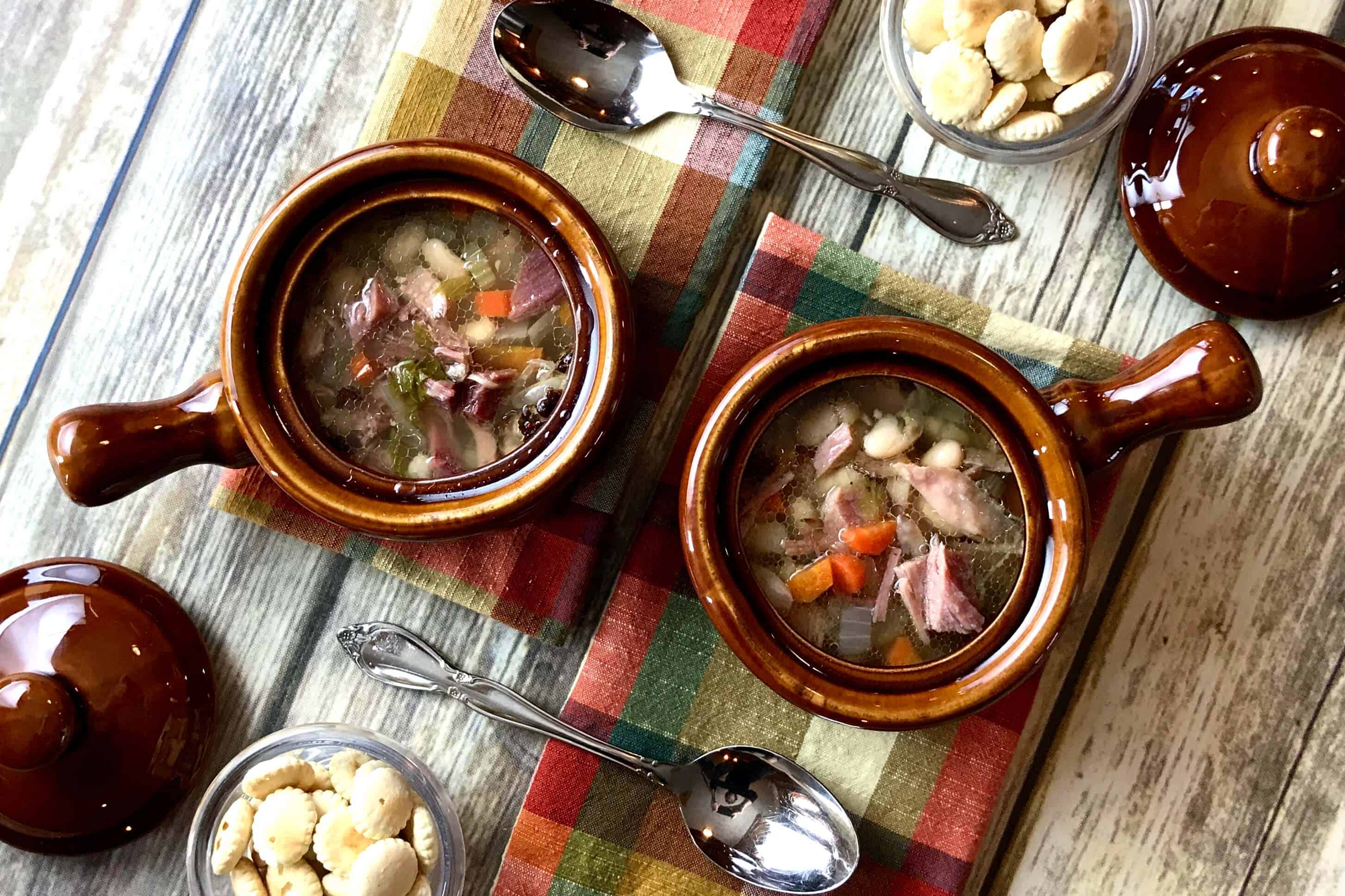 Did you ever see the episode of “Everybody Loves Raymond” where Ray’s wife, Debra, gets a recipe from Ray’s mom, Marie? And Debra follows this recipe over and over and cannot make the dish taste anything close to Marie’s? She finally discovers that Marie has changed the label on a spice jar to protect the secret ingredient and thus preserve her family’s respect for her cooking skills. 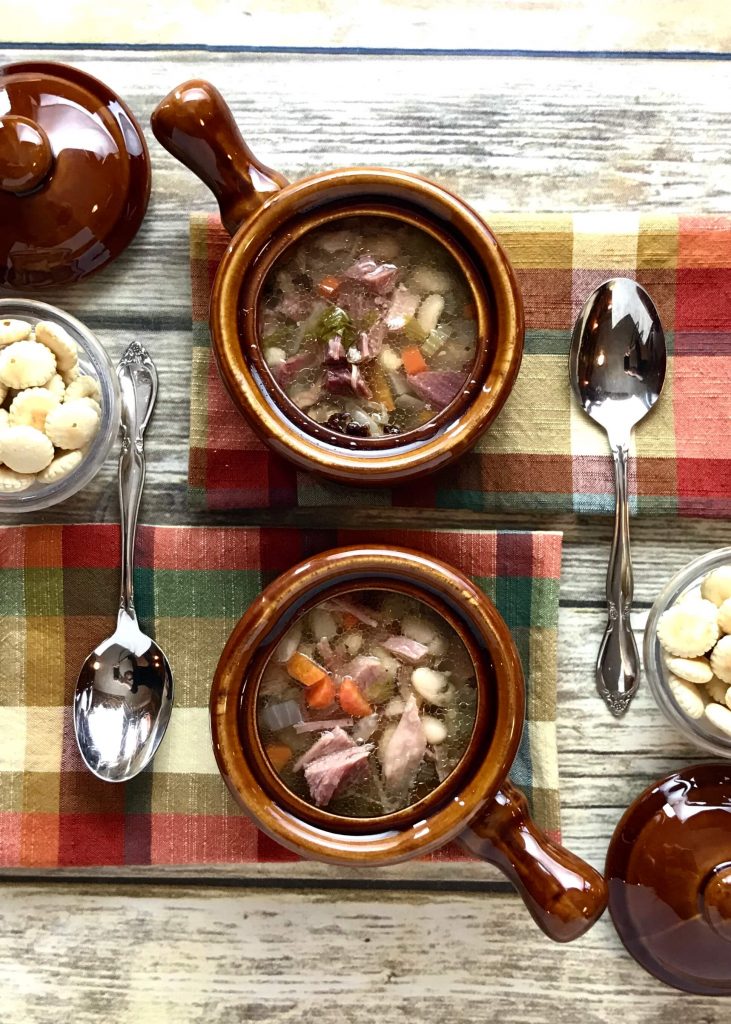 My ham and bean soup recipe involves an unintentional omission. The best part is, it was a recipe from my mom!  When she would cook a bone-in ham for our family, she would turn the leftovers into the most incredible and satisfying ham and bean soup. The beans were perfectly cooked. Little chunks of ham were swimming around the broth with the carrots, onions and celery. Every bite was … well, I’m getting carried away into fantasy-land here but it really was that good!

So when I started making ham dinners for my family, I was anxious to duplicate her soup. She gave me the recipe and I made it and was so excited to share it. I took my first spoonful and thought … “Wait a minute! This isn’t even close!” How could I have possibly screwed up such a simple recipe? Was it the ham I used? Why was the broth so …weak!?!

And here is where the “unexpected ingredient” which I mentioned in my previous post comes into play. I was with my mom some time later when she was making ham and bean soup. I was watching her every move … how she cut things, the order she added them, the expression on her face as she put it together. I was in full-on student-following-master mode!

She went to the refrigerator and pulled out an apple. So she needed a snack. Ok, I can wait. But no … she cut it into quarters, removed the core and dropped those four pieces of apple right into the pot!

There was no APPLE mentioned in the recipe she gave me! And I called her on it. Her response? “Well, sometimes I add a little apple?”

Shrug. How much difference could one apple make?

Yep … that was the crucial ingredient. It completely changed the flavor of the broth. One. Apple. 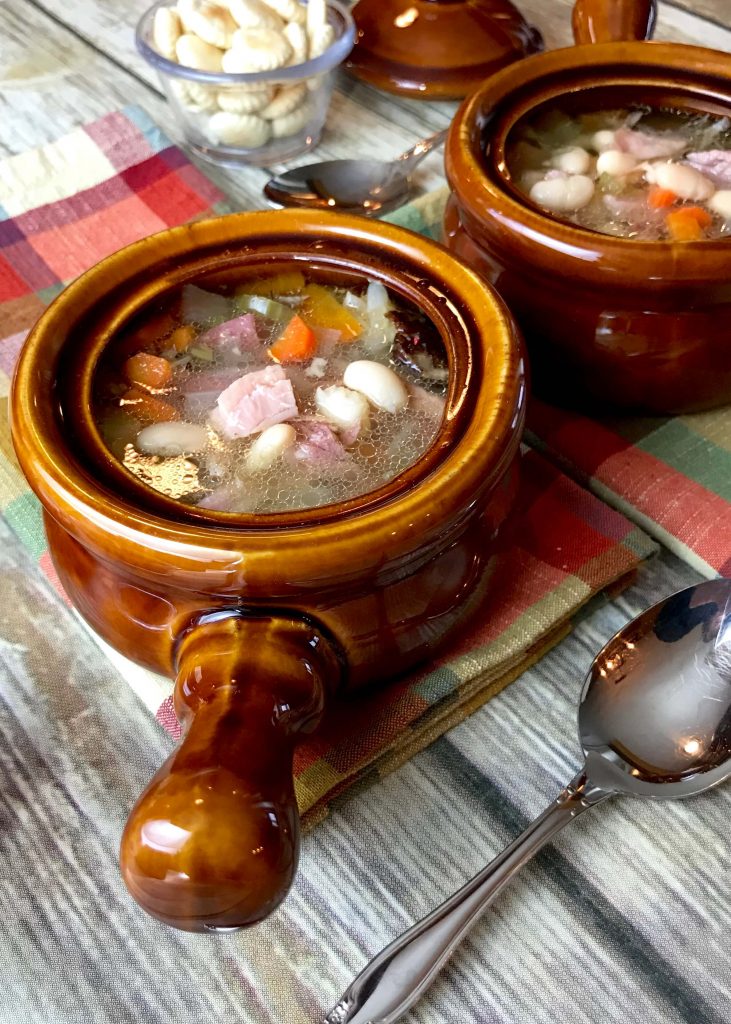 Since then I have made wonderful ham and bean soup. Occasionally I rush the cooking of the beans and they end up a little tough (see tip below), but the broth is spot-on when I include the amazing apple. 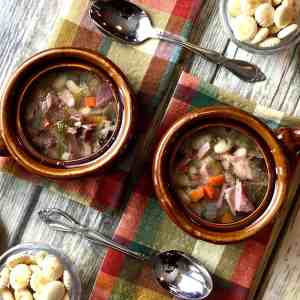 Salty ham, creamy white beans, colorful veggies combine to form the cast this hearty soup. It is, however, the apple that is the director of this show ... the one that makes sure everyone else gets the credit while quietly balancing out the whole performance. An exaggeration? Not if you have ever made this soup without the star.
Print Recipe Pin Recipe
Cook Time 1 hr
Total Time 1 hr
Servings 3 quarts

Ham Note: As mentioned in the post, this recipe is written for the wonderful leftovers and "scraps" from cooking a bone-in ham. A center-cut ham steak (with bone) can be substituted for the ham bone. Look for one that is at least one pound. TIP: Soup tastes better when it has rested for at least one day. This is a must for this soup. TIP: When you test the beans to make sure they are tender, test more than one. Some will cook a little faster than others.

I know my mom is blushing a little as she reads this. After all, it wasn’t like she purposefully sabotaged the recipe just to make sure her soup was always better than mine. She doesn’t have a dishonest bone in her body and she likes nothing better than to see other people happy.

Maybe she was just insuring I would always come home to share a bowl of soup with her. 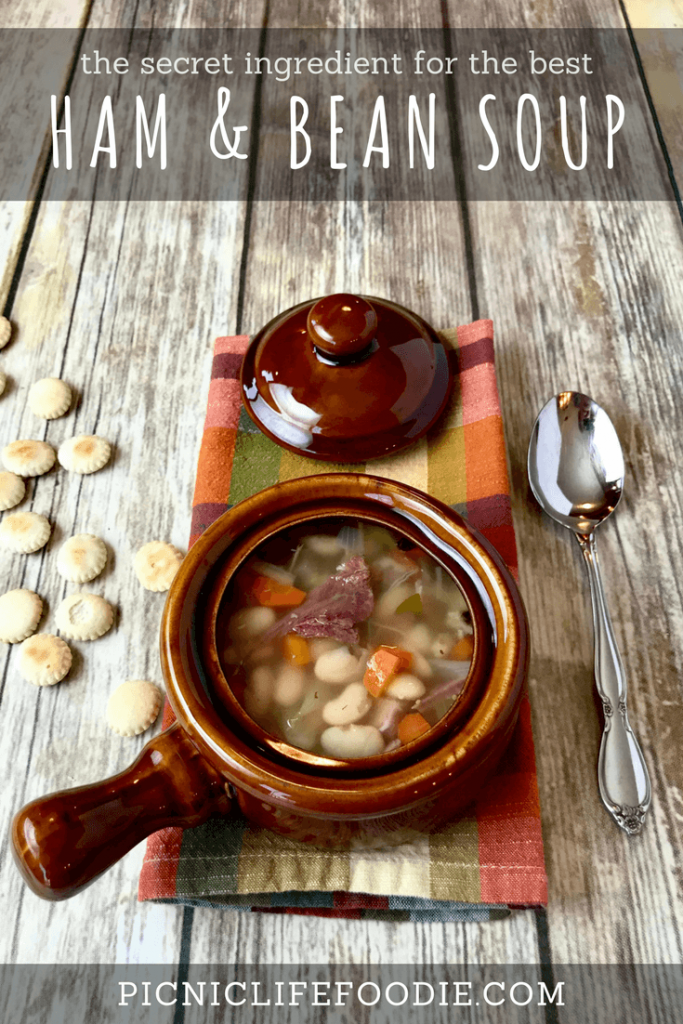 5 thoughts on “Ham and Bean Soup”